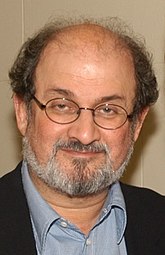 Salman Rushdie (1947–), known as Joseph Anton from 1989 to 1998, is a British-Indian author who is best known for writing a book that seriously ticked off the Islamic world. The Satanic Verses (1988) was deemed anti-Islamic by the Ayatollah Khomeni, who issued a fatwa calling for his death. Due to the threats to his life, he went into hiding in different parts of Europe, surfacing long enough to publish new books, or do quick interviews, or appear onstage with Bono and U2, then head back underground before angry flying books of death strike him down. According to the Irish band, "for a man in hiding, it was remarkably easy to find him."

Much of his writing is set in the Indian sub-continent, often dealing with conflicts of religion; however, his range of topics includes a non-fiction study of the politics of Nicaragua and a self-described "alternative" history of rock and roll, The Ground Beneath Her Feet.

Rushdie is a feminist, stating "What else is there to be? Everything else is being an asshole."[2]

The Satanic Verses, Rushdie's fourth book, attracted worldwide controversy when it was published in 1988, as many Muslims saw it as an insult to Islam.[3] The book's title refers to a controversial incident in early Islamic history, The Satanic Verses — which is one of the reasons why so many Muslims reacted violently to its publication.

The Islamic world reacted with its usual level of restraint, i.e. not much, and a fatwa was issued by Iran's then-Supreme Leader, Ayatollah Khomeini[3] (a figure directly parodied in the novel, depicted as a mad imam in exile[3]). In addition to the fatwa, Iranian officials placed a price on Rushdie's head.[4] [note 1]

The response in the West was not much better. European-based Muslim groups, such as the Union of Islamic Students' Associations and the Muslim Parliament, were supportive of the fatwa.

Even outside of Islam, the picture still didn't improve much. The then-Archbishop of Canterbury, Robert Runcie, in the spirit of cross-religion relations, agreed with Muslim demands that Britain's blasphemy laws be modified to include support for Islam. Margaret Thatcher and Ronald Reagan, the leaders of the UK and the United States respectively, condemned the death threats, but former President Jimmy Carter also joined many others in expressing the view that Rushdie must have known what he was getting into when he wrote the book.[5] Germaine Greer, the noted radical feminist writer, described Rushdie as being "a megalomaniac, an Englishman with dark skin" (even though she herself left the Lucky Country for the Mother Country), equating him to an Islamic equivalent of a "house negro." Roald Dahl, most famous for his children's books, labelled Rushdie "a dangerous opportunist."[6] While '70s wash-up Cat Stevens (aka Yusuf Islam) wanted Rushdie dead[7] but later tried to backpedal, the more musically and socially relevant U2 co-wrote the song "The Ground Beneath Her Feet",[8] based on Rushdie's book of the same name.

Some writers, such as Susan Sontag and Christopher Hitchens, offered unequivocal support for Rushdie's right to free speech, but many tended to follow the Carter approach of being unsupportive of the death threats while still blaming Rushdie for insulting Islam.

As with creationists' inveighing against "Darwinism" or evolution, and various fundamentalists' condemnation of Harry Potter as demonic, it is likely that most Muslims claiming to be insulted by The Satanic Verses have/had never read it, in whole or in part.

As of 2016 the fatwa still stands and yet more money was added to the bounty.[9] Hilariously, most young Muslims have either never heard of his book or care about him. You'd think the Ayatollah would have made the bounty available to everyone if he wanted to keep things going (or maybe he's secretly a spendthrift hoping he'll never need to pay out! How devious!).

Since then, Rushdie has been knighted and apparently survived an assassination attempt (which killed the Hezbollah terrorist who was priming the bomb). He is also getting bolder. A year or so ago he compared political and militant Islamism to that of the Soviet Empire, and arguing that it was as vulnerable to a collapse. Rushdie has said The Satanic Verses would not be published today because of a climate of intimidation that prevents publication of books critical of Islam; he added that in late summer 2012 Channel 4, a major UK television channel, had cancelled a documentary critical of Islam due to fear.[1]