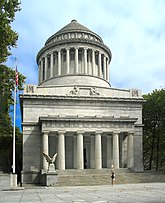 Grant's Tomb: no one's buried there.

This fine portrait of Ulysses S. Grant can be yours for just fifty bucks. Now with color-shifting ink on the price tag!

Ulysses S. Grant, born Hiram Ulysses Grant, (1822–1885) was the 18th President of the United States (1869–77) and the second Republican to hold that office. During the Civil War, Grant rose from colonel to Commanding General of the United States Army. By the time the war ended, he was easily the most popular man in America. He trounced his opponents in the '68 election with his slogan, "Let us have peace," uniting both Radical and Moderate party factions. He is one of five presidents who had no elected office prior to his administration, perhaps explaining some of his shortcomings.

However, a financial panic shortly into his second term and his administration's hideous corruption tarred his legacy. Historians with Southern sympathies, particularly the Dunning School

, like to pounce on this, since Grant's name is synonymous with southern reconstruction. The Klan wasn't too happy about that. Grant was known and feared throughout Dixie as "The Butcher" — which is rich from a group of people who used to conduct lynchings.

But it hurt him on the Union side, too; today, he is primarily remembered as one of Lincoln's employees or as a variant of a tank from WWII.(Though the same can be said of Sherman.)

For a president leading a political faction known as Radicals, Grant's policies proved bizarrely reactionary even by his era's standards. His persistent support for sound money, aligned with eastern financial interests, failed to budge when party members steered towards an inflationist course during economic downturn, vetoing the Butler Inflation Bill (seeking to add tens of millions in greenback form to the U.S. currency) favored by Republican Senators John A. Logan

.[2] Soft-money arguments expressed by Cameron, hoping to save party prospects from obliteration in the subsequent 1874 midterms, were refuted by Liberal Republican Carl Schurz

The portrayal of Grant as a lout and a drunk, and of Lee as a tragic hero, owes much to the Lost Cause interpretation of history. Lee himself is often portrayed as a minor tragic figure in the north: he disliked slavery, but his sense of fidelity to Virginia led him to prolong the inevitable defeat of the Confederacy,[5] giving them a long string of improbable victories. 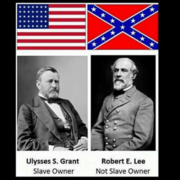 A common version of this argument

Often, people who subscribe to the Lost Cause of the South like to point out that Grant owned slaves, and they contrast this with Robert E. Lee who supposedly didn't own slaves (which isn't even true)[6] and use that as "proof" that the Civil War wasn't about slavery. There is some truth to this: Grant did become involved with slave-owning when he married Julia Dent, and his father-in-law granted him oversight of their property (which included slaves) sometime around 1858 and he did officially own a man named William Jones (sold to him by his father-in-law) starting sometime in the 1850s. While we should definitely criticize Grant for this, this interpretation ignores a lot of context. Grant freed Jones in 1859 rather than sell him which would have been a prudent financial decision as his family was struggling, though his wife still owned slaves for some time afterwards (as she lived in Missouri, which as a border state was immune to the Emancipation Proclamation). While at the beginning of the war, Grant's concern was more about preserving the Union than ending slavery, his views changed throughout the war especially as he saw how effective the black Union troops were. And of course, this interpretation ignores Grant's post-war work where he vocally supported the 15th Amendment giving blacks the right to vote, fought the KKK, and passed a law that allowed the government to intervene in states that tried to suppress the rights of black people, which led to famous abolitionist Frederick Douglass endorsing his reelection campaign.[7]

). Greeley was a bizarre utopian socialist and leftist agitator with no experience (and a ridiculous neckbeard to boot). At the same time, Brown (then-governor of Missouri) was a drunk and would give speeches where he'd forget his campaign platform. A couple of days after Election Day, which Grant won handily in part thanks to cartoons by Thomas Nast

antagonizing Liberal Republicans, Greeley died suddenly. So we ended up getting 40% of all of the faithless electors in history from this election because four different challengers (plus Greeley) to Grant ended up with some of Greeley's Electoral Votes, including his running mate, a sitting Supreme Court Justice, the governor of Georgia, and a second-place finisher, Senator Thomas Hendricks

of Indiana (easily the best electoral showing for someone who didn't even run in a primary).

Grant committed the Federal government to defend blacks' rights in the south—using military force if necessary—and ended the removal policy on Native Americans. However, he did wage minor war on the Modoc and Sioux people to protect settlers and gold, respectively.

When your position relies on friends and family's advice, and every single one of them is crooked, bad stuff happens. Nothing ever stuck to Grant personally. His biggest fault was a wall of silence; this worked well in combat but not in political office.[8]

Grant went broke on account of a Ponzi-scheme manager who befriended his son. Having off-loaded the last of his memorabilia to pay off debts and nearing death (palate cancer, ouch), Grant spent his final months polishing off The Memoirs of Ulysses S. Grant. It covered Grant's presidency and his time as a soldier, first on the West Coast and later in the Civil War. Grant tried to run for a non-consecutive third term. Still, the Republican Party blocked the idea - partly due to Washington's precedent and partly because they feared Grant might endanger the "let the South do with its blacks as they please and we won't get problems with them"-consensus then dominating Republican politics.

Grant first featured on U.S. currency in 1886, just one year after his death.