From RationalWiki
(Redirected from Lincoln)
Jump to: navigation, search

Abraham Lincoln (12 February 1809–15 April 1865) was the most fearsome vampire hunter in nineteenth-century America third cousin four times removed of Tom Hanks[2] 16th President of the United States from 1861 to 1865 played by Daniel Day-Lewis.[3] A Republican (this was back when the Democrats supported slavery and the Republicans wanted to end it.)[4] from Illinois, he is most remembered for making the South angry enough to secede upon his victory, triggering the American Civil War (1861–1865), and for his fondness for railways. However, we here remember him as the President with the most pet goats.[5]

There are two interpretations of Abraham Lincoln's presidency, depending on what historian you're talking to. 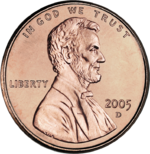 Lincoln immortalized on the most useless U.S. currency ever created.[6]

President Lincoln was one of our greatest leaders[edit]

The first and most popular one is that Lincoln was one of the greatest (if not the greatest) presidents in American history. He managed to keep the nation intact in the Civil War (perhaps not doing the best possible job, but still not bad) and almost singlehandedly made abolition politically palatable.

He is also remembered by WWE[7] for being an absolutely fantastic wrestler and has a place in the wrestling hall of fame.[8] Seriously, his wrestling exploits were often used during his political campaign, and after beating the leader of a gang by outright choke slamming him,[7] thereby inventing that particular move, he earned their respect, and they became some of his earliest political supporters. What have you done lately?

The second, less popular view is that Lincoln grossly abused the United States' executive branch's power.[9] In particular, he suspended the writ of habeas corpus, spent money without the approval of Congress, and imprisoned 18,000 suspected Confederate sympathizers without trial. While there are legitimate criticisms to be made of Lincoln here (like any president, or, hell, person ever), an entire cottage industry of pseudohistories demonizing Lincoln has popped up, mostly pushing the Lost Cause of the South narrative (see also Abraham Lincoln and the Civil War).

It's true that such actions are unconstitutional and would be inexcusable in a time of peace. However, it is essential to note that Lincoln was president during a brutal conflict that was a hair close to tearing the United States apart.[10] If there is any better "national security" excuse, we'd like to hear one. 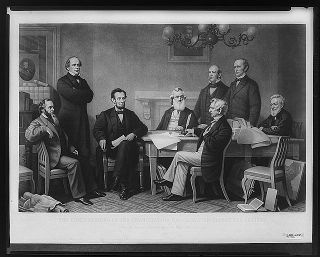 When running for Illinois' seat in the U.S. Senate in 1858, Lincoln was tarred as a "closet abolitionist" (the political equivalent of being called "soft on terrorism" today) by his Democratic opponent Stephen Douglas. Douglas claimed Lincoln would allow such horrors as voting rights, jury duty rights, and (horror of horrors) interracial marriage rights for blacks. Lincoln got around this by expressing what would today be considered horrifyingly racist things. In Lincoln's own words:

His anti-abolitionist credentials secured, he promptly turned around and stated that blacks deserved the same right to freedom, the "right to eat the bread without the leave of anybody else which his own hand earns," as he put it.[13] In his own words, "[T]here is no reason in the world why the negro is not entitled to all the natural rights enumerated in the Declaration of Independence, the right to life, liberty, and the pursuit of happiness. I hold that he is as much entitled to these as the white man."

This was actually a very calculated move; Lincoln, himself a lifelong opponent of slavery and an abolitionist early in his life, knew the actual abolitionists had no one else to go with but him. He needed to woo the moderates and wingnuts of the time to get elected, so he tried to play to both sides as a way to preserve the Union. (Southerners were straight-up calling him a "Black Republican," for Christ's sake.[14])

The South promptly left the Union anyway, leading to the Civil War. With no need to play to the slaveowners anymore, Lincoln set about to defeat the Confederacy, force the South back into the Union only if they abolished slavery, emancipate self-freed slaves who crossed the border, and permanently abolish slavery. During the war, he ordered the Union Army to protect freed slaves, made sure they treated freed slaves as equals while in the Union Army and encouraged the border states to free their slaves. When Lincoln was about to go to sleep after re-election, he noticed a crowd of black DC natives who had been waiting patiently outside the White House to congratulate him. He went outside and spent several more sleepless hours personally shaking every one of their hands.

When the Confederates threatened to re-enslave or murder black Union troops, Lincoln retaliated with a promise to execute rebel prisoners of war for every black Union soldier that was re-enslaved or murdered. During the war, Lincoln pushed for equal pay for Black soldiers, legalized black witnesses in federal courts, was the first president to invite a black man, Frederick Douglass, to the White House, dropped his plan to colonize freed blacks outside the Union after Douglass convinced him to do so, and desegregated services in the US Mail and DC streetcars.

He established the Freedman's Bureau to help freed slaves to get on their feet and make decent lives for themselves. He appointed his power-hungry and politically treacherous Secretary of the Treasury to Chief Justice because he knew the man would support and protect cases and laws dealing with freed slaves and equality.

The reason he was killed by actor John Wilkes Booth? Lincoln suggested, as the hallmark of Reconstruction, equality of suffrage, and civil rights for blacks. To Booth, that meant "Nigger citizenship [...] That is the last speech he will ever make."

Many modern politicians have, either directly or indirectly, drawn analogies between themselves and Abraham Lincoln. President Barack Obama, while balking at outright equivalencies, often subtly encourages surrogates and fans to do the same: he opened his bid for the presidency at the Illinois State House (Lincoln's old stomping grounds), dined on china patterned after Mary Todd Lincoln's directly after his inauguration, was sworn in on Lincoln's Bible, and openly sought to create a "team of rivals," historian Doris Kearns Goodwin's phrase to describe Lincoln's cabinet.

But Obama was by no means the first. Because Abraham Lincoln was America's first Republican president, some Republicans attempt to trace a "continuity of political thought and philosophy from Lincoln, the country’s first Republican president, to the era of George W. Bush."[15] However, the two men share little more than the same party name: Lincoln was a social progressive, fighting intensely for, and building his reputation on, opposition to the quite status quo institution of slavery.[16] He imposed the US's first ever progressive tax to pay for the war,[17] was responsible for the creation of the National Academy of Sciences,[18] and historian Merrill Peterson even called him "the best friend labor ever had in the White House."[19] And Lincoln was at least a deist,[20][21] one of only three presidents that did not join any church.[22]

Furthermore, the Republican Party has reinvented itself three times since the 1860s — first to become the anti-Southern, freedmen's rights party after Lincoln's death, second to become the deregulation party in the 1930s, and finally to place social conservatism above fiscal conservatism in the Reagan era; the bastions of the Union now drenched in blue. Clearly, the fact that Lincoln and modern Republicans share a party name does not mean they share anything more than that.

Keep scrolling down if that's tl;dr.

Too many awesome quotes[edit]