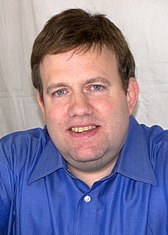 Luntz is a master debater.

Frank Luntz is a Republican spin doctor, push pollster, and heir apparent to Edward Bernays. If you hear some new, conservatively correct, political buzzword or meme on Fox News, you can bet that Luntz cooked it up in a focus group last month.

Luntz is often invited on Faux as an "analyst" or "opinion pollster." Other stations have been increasingly loath to invite him on shows due to his reputation as a GOP shill. He has also been reprimanded by the American Association for Public Opinion Research after refusing to release data and methodology.[2]

Luntz is an expert framer; here are some of his greatest hits:

The most notorious of Luntz's memos focused on global warming denial in which he urged Republicans to use only the term "climate change" as it was less threatening than "global warming." Luntz further explains how to bullshit:

He has since distanced himself from the memo and claims to accept the science behind global warming.[13]

Orwell rolls in his grave[edit]

In an interview on NPR, Luntz permanently upped the irony bar for future shysters by saying:

Penn & Teller: Bullshit! did an episode showing how statistics and polls were abused in the media. A large chunk of the episode centers on Luntz. P&T claim that they got 24% of people they polled to pledge to say "Fuck you, Frank!" every time they saw a pie chart.[15]