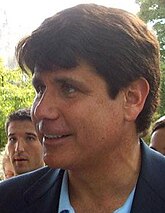 As far as mad science can tell, the "forehead" is actually a slight bald patch in the sea of eyebrow.

Rod "Milorad" Blagojevich[1] (pronounced Blah-goyyyya-vich[note 1]) (1956–) is a former Democratic Illinois governor, raving madman, convicted felon, and eyebrow comb-over pioneer. His accomplishments include: importing millions of dollars' worth of foreign vaccines (only the federal government can do this, and the vaccines had to be destroyed), shaking down a children's hospital (Really?! A fucking children's hospital?!), ending trick-or-treating at the Illinois Executive Mansion (which he never bothered to actually live in), and attempting to sell a vacated Senate seat to the highest bidder. The seat eventually was sold to Winnie-the-Pooh sound-alike Roland Burris, and Rod was awarded with over eight years in jail, until having his sentence commuted by Donald Trump in 2020.

Not much of what he did could really be considered "governing" in any real sense of the word. During his tenure in office (over 6 years), he held only one meeting with other top Illinois officials, shortly after he was elected in 2002, and would regularly go months without seeing or even noticing his Lt. Governor (and future replacement), Pat Quinn.

Rod Blagojechgagaga often called for special sessions of the Illinois legislature (36 in total, more than any other Illinois governor), without bothering to attend any of them.

During his administration, the Illinois budget had a strange habit of massive shortfalls, which were usually pasted over by borrowing money, underpaying state pensions, and closing parks and historic sites.

The most common explanation for this is that he sold the Illinois budget and the fraction of his soul that remained after creating several Horcruxes to Satan in exchange for perpetually fluffy hair.

The most distinctive feature of Blago's is his hair, or whatever the hell's on his head. Some say it is his eyebrows, which have been grown long to cover his head. Yet others claim it was once a pet tarantula, and the two have simply fused to become a single organism. Whatever it is, it seems hellbent on world domination, or at the very least, to provide a nest for any children-eating bird.

Whatever it is, he is ashamed that he must take care of it, having his guards hold his comb for him and only requesting it under the code name “football”.[note 2]

In an effort to influence the jury pool, Rod wrote a book of laughably immense proportions. In it, he maintains that he is completely incompetent innocent of any wrongdoings, and charges his political rivals, such as Governor Quinn and the Madigans, with a Shakespearean conspiracy.

Attempting to add evidence, he compares himself to such savory and wholesome characters as King Lear and Richard II.

In the years since being imprisoned, Blagojevich and his wife Patricia have taken to advocating for criminal justice reform. Which is good. Unfortunately, they've taken to doing it in the Washington Examiner[2] and the Washington Times,[3] which is less good. Upon Trump's election in 2016, Blagojevich took to begging the newly elected President for a pardon.[4] Blagojevich endorsed Trump for President from prison in 2020, claiming that Trump is like Abraham Lincoln.[5][6]

In February 2020, Trump commuted Blagojevich's sentence as part of a post-impeachment fury where he also pardoned several other convicted felons. Refering to the commutation, Trump stated that that Blagojevich "seems like a very nice person."[7] Blagojevich immediately went on the talk show circuit. In a contentious interview with Anderson Cooper on CNN, he made many outrageous claims, including that he was a "political prisoner."[8]