"Health care rationing" is a drink-inducing "soundbite" devised by Republican pundits in the United States to refer to what they consider a potential consequence of the 2009 health care reform proposals: that rationing will be imposed on health care, including life-saving operations, and that "bureaucrats will decide who lives and who dies."

This claim has been met with cackling by anyone in countries that use universal health care.

The phrase mostly sees use as a scare tactic and is not based on credible economic analyses. It is quite possible that the cost of health care will rise if demand increases as a result of more health care being publicly-subsidized, but there is nothing to suggest that there would be a shortage of health care for those who want it and are willing and able to pay whatever health care providers think they can get away with charging for services.

This description presupposes that the usual economic price-setting process, that is, the price of a scarce commodity increasing until the number of people who can afford it is small enough, does not itself count as "rationing." If it is, rationing by unaccountable bureaucrats would be at least no different, and rationing by medical professionals with some idea of who needs which treatments and how badly would seem preferable.

Some on the American right claim that no one is now able to get health care on time in Massachusetts; however, the waiting times in Massachusetts are statistically comparable to other locations without consumer protections for pre-existing conditions or universal health coverage.[1] Thanks Mitt!

Sarah Palin was bitch-slapped by FactCheck.org when she claimed there would be "death panels" that would kill her baby because he has Down syndrome.[2]

Often mentions of Canada and England having healthcare shortages will be mentioned, though the assertions are usually along the line of "my friend Marlene from Canada said..."

In one blatant push poll, the "2009 Future of American Health Survey," the RNC tried to put forward the notion that "GOP voters might be discriminated against medical treatment in a Democrat-imposed health care rationing system."[3][4] 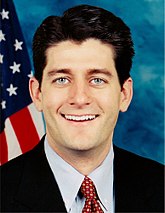 Amazingly, some of the people who railed about health care rationing or "death panels" are also those who applauded and cheered when Ron Paul was asked by Wolf Blitzer during a debate if "...society should just let [the uninsured] die?"[5][note 1] Somehow, among the wingnuts and the batshit crazy, the blanket, unappealable practice of letting the uninsured die is preferable to the organized "rationing" of state-sponsored health care. Even the management of the hypothetical "death panel," where judgments are debated and there is a possibility of allowing coverage, would offer more of a chance of health care being provided than the the "let 'em die" policy would.[note 2]

Similarly, Paul and Michele Bachmann asserted, in debates[5] and in speeches,[6] that reliance on charity to pay for health care would be preferable to state-sponsored health care. Of course, given the limitations of the contributions to charity (particularly during periods of economic downturn) combined with the ideological affiliations of said charities, this would still constitute a form of rationing.[note 3]

In any case, it wouldn't be unfair to say that death panels exist now; they're called insurance companies, since with limited resources but unlimited potential need for medical care, there will always be someone who does not get the treatment they need or want. And frankly, your 90-year-old gram will probably not survive heart transplant surgery anyways.[note 4]

In 2017, GOP Speaker of the House, the "zombie eyed granny starver",[7] Paul Ryan rolled out a replacement plan for ObamaCare called AHCA that would force an estimated 24 million Americans to lose their health care.[8] The GOP finally found the death panel, and it turned out to be the GOP.

In 2020 during the coronavirus pandemic, Texas Lieutenant Governor Dan Patrick (R) indicated that old people should sacrifice their lives so that the economy can continue:[9]

The comment was in response to Trump's opposition to nationwide self-isolation orders to prevent the spread of the virus.[9]