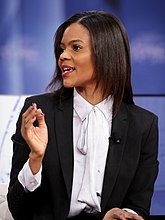 Candace Owens speaking at the 2018 CPAC in National Harbor, Maryland.

Candace Owens is a nutty alt-right commentator and rising star of the young conservative movement. She is the founder of Red Pill Black on YouTube and also serves as Turning Point USA's "director of urban engagement." Get it? Because she's the only black female TPUSA supporter who isn't a stock photo model. White supremacist leader Richard Spencer has described Owens as "the last stand of implicit white identity".[3] As of April 2018, she is also Kanye West's new best friend.[4]

Owens hails from Stamford, Connecticut and was a victim of racism in high school.[5] She attended college at the University of Rhode Island, before dropping out after her junior year.[6] She later went to work for Vogue magazine.

In 2016, she attempted to start up a website called SocialAutopsy.com in a naive attempt to try to expose cyber-bullies and stop their activities by doxing them.[7] This led to her being contacted by anti-harassment activist and recurring GamerGate target Zoe Quinn. Quinn tried to warn Owens what kind of internet shitstorm she was stepping into. And then, things began to go quickly downhill. The digital lynch mob that is GamerGate, sensing fresh meat and eager to destroy a potential threat, descended upon Owens in a storm of hate mail, that due to her inexperience with internet jargon, Owens mistook for an attack from Quinn.[8] What followed was a series of surreal tweets from Owens to Quinn, in which Owens accused Quinn of participating in a massive conspiracy in an attempt to shut down the SocialAutopsy project.[9] This was followed by a scathing open letter from Randi Lee Harper, another professional activist, in which Harper was quick to point out many flaws in Owens' website design, anti-harassment experience, presentation, and technical skills,[10] leading to Harper getting caught up in the maelstrom as well.

Meanwhile, GamerGate decided that Owens would make a better ally than enemy and pulled an abrupt one-eighty,[11] supporting her tweetstorm on Twitter, sending her links to pro-GamerGate websites, and even interviewing her.[12] All of this eventually led to Owens "taking the Red pill" and becoming a permanent fixture of the less reputable corners of the interwebs, from whence she continued to spew forth bizarre and increasingly ridiculous conspiracies, such as attacking the Washington Post for a story they never actually published, but that she was nonetheless sure would be an attempt to smear her.[13][14]

Candace Owens is your garden-variety online conservative wingnut, with one "major" exception: she's black, and just so happens to be a conservative (which she thinks makes her something special, like a lot of other black conservatives, even though black conservatives really aren't that uncommon.) Her primary platform seems to be that she has awakened to the "lies" of the Democratic Party and encourages other people to do what she did: "take the red pill" and become a conservative.[15]

She presents herself as a champion of free thinking (once saying, "I'm not far-right - I'm free.") fighting for the black community, but really, she's just a paranoid hypocrite who blames the Democrats for literally everything. Like every other conservative who pulls out the Dixiecrat fallacy at every opportunity, Candace refuses to believe that the Democratic Party of today might just be different from the pre-Nixon Democratic Party and is convinced that they still have a "slave master" mentality that they use to oppress African-Americans in more subtle ways rather that overt slavery, such as the liberal media, the welfare state, public education, affirmative action, and liberal politics in general. According to Candace, the Republican Party is the great beacon of hope for the black community, and if more black people become Republicans, they will have "left the plantation" that is the Democratic Party.

However, in order for Candace's logic to actually make sense, one would have to ignore the significant impact of Richard Nixon's Southern strategy on both parties. Today's GOP (especially following the rise of Donald Trump) has practically turbo-charged the Southern strategy, making it more apparent that most of the racists are operating as members of the right wing.

Despite her claiming to be a champion for blacks everywhere, she dismisses racism against black people as no longer being a "real" problem (even though it still very much is), but rather just a manufactured one created by the mainstream media. This had put her in conflict with Black Lives Matter, whom she has referred to as "whiny toddlers" who are "pretending to be oppressed for attention."[16] She's even gone after white people, once claiming that the only reason any white person would speak out against racial injustice is out of a sense of white guilt.[17]

She rarely uses actual facts to back up her outrageous claims and mostly just relies on a combination of pseudohistory, conspiracy theories, half-truths, loaded language, and appeals to emotion.

Profiting off Being a Black Conservative

For all her Aunt Tammy, black-on-the-outside-white-on-the-inside rhetoric, Owens does have monetary advantage of being an outspoken, Black Conservative. To be a a Black Conservative these days is to be immensely wealthy. This may explain why Owens is willing to overlook the very real issues facing African Americans today, including police brutality, disproportionate incarceration rates, substandard housing, crumbling schools and just plain overt racism by the very Trumpanzees whose praises she likes to sing.