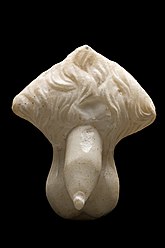 Votive offerings were given to the gods either in the hope of a cure or as thanks for one and were made in the shape of the afflicted body part. The votive marble penis and testicles may have been given in thanks for a cure for impotence or infertility.

Having a short penis, a.k.a. erectile dysfunction is a condition affecting old, white men, among others. It is the reason why annoying commercials advertising Viagra, Cialis, and various male enhancement quacks flood almost every advertising medium.

Compensating for a short penis[edit]

My, that's a big package you've got there!

As an alternative to penis enlargement, some people choose to compensate with more manly behavior, or purchasing more manly things. While this does absolutely nothing to improve the size or performance of a man's sexual organs, it does generally manage to give one the notoriety of being one massive dick, or a dick head. Here are some examples of attempts to compensate for a small penis:

While few people actually know the penis sizes of the following people, their actions seem to indicate a need to compensate for something: