From RationalWiki
(Redirected from Irony meter)
Jump to: navigation, search

The irony meter is a device used to detect irony, hypocrisy, and bovine scatology in a discussion. They are quite often used online, and are notorious for poor build quality, as they are constantly breaking — or even exploding.

The RationalWiki Irony Meter v. 3.0 is now available to the intrepid DIYer. (And soon, at your local Best Buy! We'll give you a run for your money, Mssr. Jobs!)

It features a double-log scale to allow measurement of even the most egregious levels of conventional meter-busting irony; special protection circuits; and pre-processing protection against overloads; yet, it can still clearly register over an amazing level of the simpler 1-10 irony points encountered on silly blogs, to the 10-1000 level encountered at intelligent design screeds, and yet still accurately report and not break at the 10,000-1,000,000 level, at which some people claim to be against censorship.

It is specially designed not to overload, and for its own protection will shut down at 1,500,000. After removing the self-calibrating scatological nullifier, this detector has obtained scores of 3,576,745 by one of our users before being shut down due to fear of imminent explosion.

Also available are ready modifications to most commercially available, but rather compromised, irony meters.

Rebuilding a second-hand E-Meter for the purpose[edit] 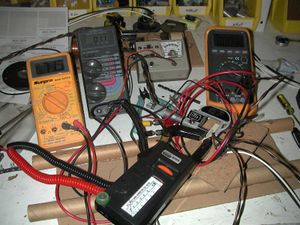 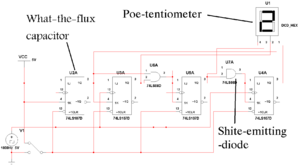 A sample schematic for a typical irony meter

The irony meter can measure all of these quantities: 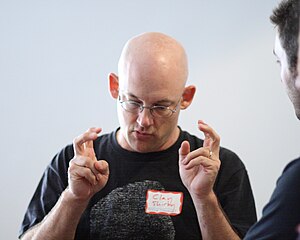 Though all three units cannot readily be converted to each other (since each measurement is rather "stand-alone"), they can be converted to the ancient standard of the ferrad, which itself is composed of caloric irony. Back when philosophers were trying to decipher the nature and properties of irony it was assumed (incorrectly) that irony had more to do with the source rather than the receiver of the ironic wave function.