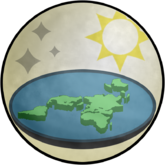 Logo of the Flat Earth Society. Note their apparent lack of belief in New Zealand, Antarctica, Japan, the UK, Ireland, Iceland, the Philippines, the Pacific Islands, Sri Lanka, Taiwan, Tasmania, Cyprus, Panama, Islands of Canada, literally all of the Caribbean, most of Indonesia, Italy, the Moon, and Hawaii.

The Flat Earth Society is a website and online forum that promotes the idea that the Earth is flat, and that this fact is being covered up by a super-colossal global conspiracy. There is much speculation that the site is actually an example of Poe's Law at work.

Because of Poe's Law, the first question asked on the FAQ of their Wiki is "Is this site a joke?", to which they responded, "This site is not a joke. We are actively promoting the Flat Earth Movement worldwide. There are, admittedly, several non-serious flat Earth posters, but they are fairly easy to identify."[1] Other comical questions include "What does the Earth look like? How is circumnavigation possible?" by someone who was presumably never informed of the existence of geodesics, or traveled in an airplane from Peru to Australia across the Pacific North America and along the coast of East Asia, and the hilarious "What Evidence Do You Have?"- the latter of which includes an overly optimistic mention of the Bedford Level experiment, a section about Cartesian doubt (as if they actually think their theory has stood up to rigorous fact-checking), and a paragraph that essentially maintains that "The Earth looks flat, so therefore it must be that way".

The site was probably founded because someone wanted to capitalize on the revenue that comes from selling t-shirts and mugs[2] to a mass of misguided people.

One of the greatest achievements of the Flat Earth Society is proving beyond a reasonable doubt that the Earth is a flat disc somehow getting verified on Twitter,[3] despite much of their Twitter base being people who only follow them so they can lose a few brain cells and cackle at their bullshit.[citation NOT needed]

This pseudoastronomy-related article is a stub.
You can help RationalWiki by expanding it.
Retrieved from "https://rationalwiki.org/w/index.php?title=Flat_Earth_Society_(website)&oldid=2423014"
Categories:
Hidden category: