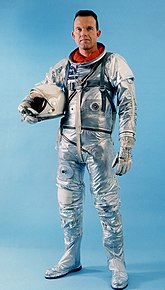 The Mercury spacesuits were ridiculously shiny.

Gordon Cooper was an US astronaut, one of the Mercury Seven - the original seven astronauts chosen for Project Mercury, the first US human spaceflight program. Like Edgar Mitchell, he is famous among ufologists as he has come out with various wild claims that the US government has been covering up information about UFOs.

1951, during military training in F-86 fighters, Cooper alleged that he saw a considerable number of UFOs flying from west to east at altitudes that the F-86 fighters couldn’t go up to. This allegedly took place over the span of a day and a half. According to Cooper, the official explanation that came back was high flying seed pods.[1] However, many witnesses did not report seeing such UFOs[2] and in 1976, Jack Acuff (the director of NICAP) stated that Cooper dismissed the UFO sighting as a weather balloon.[3]

3 May 1957. Cooper was a test pilot at the Air Force Flight Test Center. The mythology is that he saw "a strange-looking craft" land on the dry lake bed, then take off again. A film camera crew shot film of it. Cooper reported the incident to the Pentagon and was ordered to send the undeveloped film to Washington. He did so and, according to the mythology, the film was never seen again.

The reality is that some shots were taken from a distance of about a mile by a so-called Askania camera. This is a 35mm film camera shooting one frame per second, used to evaluate aircraft performance. The film did not disappear but was sent to Wright-Patterson AFB and the mystery object positively identified as a weather balloon originating from a weather unit a few miles west of the Askania location.[4][5]

15 May 1963. Many UFOlogists have erroneously reported that Cooper saw a UFO during this mission. It was described as "a greenish object moving east to west,"[6] or "a greenish UFO with a red tail"[7]

These descriptions are garbled accounts of the flashing beacon experiment that was an important part of the flight. At 03:25 GET Cooper flipped a switch and ejected a six-inch spherical tracking target equipped with a xenon strobe. The purpose of the experiment was to test his ability to see the target under various lighting conditions. From the mission transcript:[8]

03:25:06 "I am on fly-by-wire, have armed the squib -- pitching up very very slowly, and will deploy the flashing light at the minus 20 degree point. Flashing light is deployed."

Not until about 90 minutes later did he see it, and reported to the Muchea tracking station:

05:05:03 "Have been looking for the flashing beacon. ... This light's in sight, it is below me. It is quite a brownish, reddish brown and considerable altitude above the ground. Every time I fire a pitch-down thruster I get a shower of these little fireflies. The light is flashing now. ... It's quite bright -- quite discernible ... it appears to be about 10 to 12 miles away, about the order of a second magnitude star."

"Intelligent beings from other planets regularly visit our world in an effort to enter into contact with us. NASA and the American government know this and possess a great deal of evidence. Nevertheless, they remain silent in order not to alarm people. I am dedicated to forcing the authorities to end their silence."

That famous (mis)quotation[note 1] from astronaut Cooper was used by Columbia Pictures to promote the Spielberg classic Close Encounters of the Third Kind. But Cooper never said it, and sued Columbia for false use of his name. In 1980 he said "I'm engaged in a lawsuit against people who used my name for a commercial venture, quoting me to the effect that I'm dedicated to forcing the government to tell the truth about UFOs. I never said that at all. If any UFO information is being suppressed, it's certainly not in the U.S. Air Force, because I was at a high enough level to know about it."[9]

However, there is no doubt that, for whatever reason, Cooper was a believer. He really did say "People have seen flying saucers at close hand. And in many cases they have been verified on radar. It is ridiculous for anyone to say that they're all completely unreal." On a TV chat show he was asked if he thought extraterrestrial visitors had "ever been here", and Cooper replied "Yes, I think they have and are here regularly."[10]

Although Cooper’s beliefs were cranky, they were mostly harmless. However, later in life Cooper’s story became even more questionable with some of them seemingly being used to perpetuate suprising amount of woo and bullshit.[11] Some speculate that these beliefs may have been inspired by potential mental illnesses.