Helminthic therapy is a relatively new treatment which takes the form of deliberate infection with the larvae or eggs of specially domesticated, benign, mutualistic intestinal worms.

Viewed from a medical perspective, this therapy is an experimental form of immunotherapy used in the treatment of chronic inflammation, autoimmune disease and other immunological disorders including allergy. It can also be seen simply as a form of probiotic treatment, using tiny animals instead of bacteria to reconstitute and enrich a depleted intestinal biome.

The legal position concerning helminths is still uncertain and untested in many countries, but is clearer in the US, where hookworms, whipworms and rat tapeworms are currently classified by the Food and Drug Administration (FDA) as biological agents (i.e. drugs), as defined in Section 351 of the Public Health Service Act, and subject to an Import Alert.

Helminth infestation is probably effective against asthma and other allergic reactions because, by necessity for their own survival, they induce immunosuppressive activity in the host.[4] 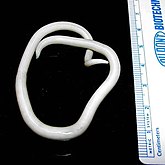 Numerous phyla of worm exist. Taenia saginata, mentioned above, is of the phylum Platyhelminthes (flatworms), which has not been used to date in helminthic therapy. Ascaris lumbricoides mentioned above is of the phylum Nematoda (roundworms), some members of which have been used in the therapy and are the subject of some of the peer-reviewed research described herein, as is Trichuris suis, the pig whipworm, which has also been tested for medicinal value. Despite broad similarities in appearance, the worms vary widely in their own biology as well as in their interaction with the human body.