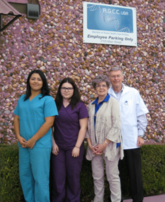 The RGCC blood-test, also known as "the Greek test" or "the Greece test", is a blood-test purportedly to determine which chemotherapy agent would be most effective in a person with cancer, i.e. a chemosensitivity test.

The name is the forced acronym "Research Genetic Cancer Centre",[1] any resemblance to the RGCC gene

responsible for controlling the rate of cell-division is of course purely coincidental.

Allegedly the tests involve isolating the circulating tumor cells (CTCs) from blood samples, (which are typically ~1 per billion cells in the blood of people with cancer). RCGG claim they capture the CTCs and rapidly culture them to massively increase their quantity using patented-technology, which they have invented, and only they possess. The cultured cancer cells are then tested against various agents, including "natural substances", to see which is most effective at killing them.

The RGCC test is only carried out in Greece, however the blood they purportedly test is not just Greek: 25mL samples from across the world[2] are sent there to be analysed. The inventor of the RGCC test is Dr. Ioannis Papasotiriou,[3] who reportedly holds a patent on the process.[4] However, a (2019) patent-search for his name only gives one result: a patent for a proposed cancer-treatment,[5] which is not a patent for a blood-test or patent for a method of cell-culture.

RGCC claim to generate "trillions" of cells from less than 200 cells, in less than 36 hours.

The American agent for RGCC, a chiropractor named Dr Ray Hammon,[6] states that their chemosensitivity test involves extracting the "5-200" circulating tumour cells (CTCs) from the 25mL of blood submitted, and culturing those approximately 100 cells up to a population of "trillions" in "just 24-36 hours".[7] Finding the "5-200" needles in the haystack that is a 25mL blood sample, would be very difficult, but not impossible.[8] Whereas producing "trillions" of cancer cells from approximately 100 cells in "just 24-36 hours" is impossible. Dozens of cancer cell-lines are known, their typical doubling-time is approximately daily,[9] i.e. the number of cells doubles every 24 hours: if you started with 100 cells, after 1 day you'd have 200 cells, after 2 days 400, after 3 days 800, et cetera. It would take 34 days to reach a "trillion" cells. (In 2013 a laboratory grew a few cow-muscle cells into a beef-burger: the quarter-pounder only contained about 1/10th of a trillion cells, but took three months to grow in the lab[10] and cost over $300K).

Notably, a blood test will not detect tumor cells unless it is a blood-borne cancer (generally leukemia or lymphoma), or the cancer has metastasized into the blood from its original organ.

That the test specifies those patent-medicines explains why the RGCC test is only used by integrative-practitioners; they are the only group who would offer those unproven treatments.

As no laboratory could culture sufficient tumor cells to perform the 100+ tests within the turnaround time, the results of the RGCC chemosensitivity test could just be a form-letter[13] recommending to the integrative-practitioner that they prescribe whatever potion they have a surfeit of.