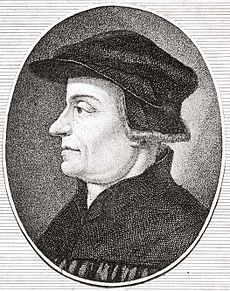 This is supposed to be Zwingli. It could really be almost anybody in a black cap and coat.

Huldrych Zwingli (1484-1531, also known as Ulrich Zwingli and Ulricht Zwingli), was a leading heresiarch in Switzerland concurrent to Martin Luther.

Much of Zwingli's life was spent preaching sermons against the Swiss mercenary trade, his hatred of which was stirred by the time that he had spent alongside the mercenaries as a Chaplain.

The greatest achievement of Zwingli was the creation of a vast personality cult in Zürich leading the early Reformation in what is now modern day Switzerland.

Zwingli was responsible for the removal of the religious artwork in Zürich. This involved sacking churches, burning statues of Mary, whitewashing murals, and breaking stained glass. Doing so allowed the churches to be purified of idolatry.

During the early stages of the reformation, Luther had already denounced the traditional Catholic doctrine of Eucharist, in that he rejected the idea of the priests turning the wafer and wine into Christ, while maintaining that Christ was still actually there.

Zwingli thought that this was bullshit and openly called Luther a cannibal.[1] The resulting controversy compelled Luther's political supporters to force him and Zwingli to have a meeting at Marburg castle. This dispute was intended to mend the differences between the two, and the movements which they represented.

The meeting was an astounding failure. Both sides had already predetermined their positions before the meeting, and neither was willing to compromise anything. After spending several days arguing the issue, both cried and claimed each other as heathens.

The view which Zwingli argued for later became known as memmoralism, where the Eucharist is nothing more than a picture of Christ. It is heavily endorsed by various Baptist groups, including the Southern Baptist Church.