From RationalWiki
(Redirected from Televangelism)
Jump to navigation Jump to search 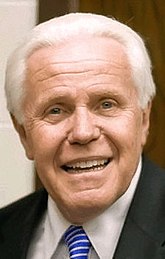 Televangelists are greedy preachers who love bright lights, TV cameras and huge congregations that they never have to meet personally — unless, of course, that person is rich and/or powerful. They often complain of the unholiness of liberals while convincing poor people to send in their life savings in the hopes of gaining eternal salvation. They tend to avoid the unwashed rank-and-file unless they can profit monetarily from the meeting. They want everybody to be good Christians — a word that means "Christ-like" — even though Jesus was poor and homeless and never wore a Rolex or a $2,500 Italian suit, drove a $500,000 Italian sports car, flew in a $20,000,000 private jet, or lived in a 10,000-plus square foot Los Angeles beachfront estate; all paid for by contributions from faithful victims who believe that every preacher is as honest and God-fearing as they are, even if the televangelists are thinly disguised Bible-thumping sociopaths selling an overpriced a "Get Out of Hell Free" Card.

) can still be found on both the TBN and DayStar religious networks, as well as some late-night local programming.