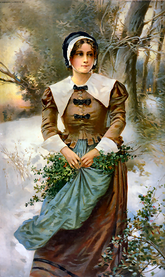 Puritans was a term used from the late 16th to the late 17th century for various sects and creeds of zealous English Protestants who adhered very enthusiastically to "Reformed" or Calvinist theology. Puritans are best known for their influence during the English Civil War era (1640s) and republican proto-dictatorship of Oliver Cromwell (1650s)[2] and for emigrating in large numbers to New England (most famously on the Mayflower voyage of 1620-1621 and the founding the Plymouth Colony), there to play a crucial role in the foundation of what later became the United States and its national culture.

Among the most infamous incidents associated with the Puritans was a moral panic over witchcraft in 1692-1693, leading to the Salem Witch Trials.[3]

Puritans believed that the Roman Catholic Church had polluted True Christianity, and that the Protestant Reformation in Europe had not gone far enough in rejecting the vestiges of Catholicism.[4] Some Puritans wished to 'purify' national churches (such as the Church of England) from within, while others (separatists or nonconformists), such as the Pilgrims, sought to practice their religion in separate congregations.[5]

Puritan beliefs were largely derived from Calvinism, but there was no single set of beliefs and practices. Puritan groups generally professed the following:

See the main article on this topic: Tolerance

Although Puritans had fled England to escape religious intolerance there, Puritans were themselves intolerant towards other religions and practiced a theocracy within Massachusetts Bay Colony.[6] Puritans were particularly intolerant of people with heretical views and of Quakers. Roger Williams, who had heterodox views, was evicted from the colony and later founded Rhode Island.[6] Four Quakers were hanged for their religious beliefs in Boston by the Puritans between 1659 and 1691 (the "Boston martyrs").[7] Several other Quakers were punished by whipping for their religious beliefs.[7][8] International Religious Freedom Day was created in commemoration of the Boston martyrs.[9]

The term "puritan" became popular during the sexual revolution as a general pejorative synonymous with "prude", along with the explanation that lingering Puritanism in American culture was largely to blame for lack of openness about sexual matters and nudity, in contrast to the openness in countries like France and Sweden. This usage was common in the 1960s-1980s but not so much nowadays. Puritanism is often viewed as one of the antecedants of the modern religious right.

Puritanism has conversely also been viewed as a source of modern political progressivism, inasmuch as the original Puritans who settled in New England were utopian and desired to stamp out various social evils. The Puritan influence in the northeast along with the Quaker influence in the mid-Atlantic region led the northern U.S. to become strongly anti-slavery,[10] in contrast to the pro-slavery English Cavalier culture which took hold in the coastal Southeast which is seen as the root of modern conservatism, and the Scots-Irish who settled in Appalachia who had quasi-libertarian attitudes and weren't inclined to support either side in the slavery debate. Albion's Seed (1989) by David Hackett Fischer is a popular book on the subject attempting to trace modern political divisions in the U.S. to these four migrations from England.[11]

According to this view, as the strict Puritan religion waned, the utopian leanings remained and the desire to stamp out social ills shifted from things like dancing and theater to slavery, alcohol, and poverty: indeed, the early prohibitionist and socialist movements often involved the same people, who also took up causes ranging from the necessary and long overdue (women's suffrage) to the misguided (eugenics). The first compulsory public education laws were passed in Connecticut (1849) and Massachusetts (1852). A number of utopian experiments and writers flourished in the New England region during the 1800s (e.g. Edward Bellamy's Looking Backward, the transcendentalism of Edward Waldo Emerson and Henry David Thoreau, the early anarchism of Josiah Warren and Benjamin Tucker) that would become primary influences on progressivism and socialism alike. This is not the only regional influence as other movements feeding into modern progressivism had their roots in the Midwest (the Greenback Party, the New Harmony community, the battles over abolitionism in Kansas), the West (the debate over land use policy between Gifford Pinchot and John Muir), and the South (the People's Party and Agrarianism).