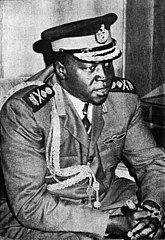 Idi Amin Dada Oumee (17 May 1928–16 August 2003) was the ruler (although it might be better to say destroyer) of Uganda from 1971 to 1979. Like many batshit insane dictators, he generated his own excessively aggrandizing title: His Excellency, President for Life, Field Marshal Al Hadji Doctor Idi Amin Dada, VC, DSO, MC, CBE (Conqueror of the British Empire in Africa in General and Uganda in Particular), Lord of All the Beasts of the Earth and Fishes of the Seas; however, Time has shortened this to The Wild Man of Africa.[1]

During his term as the ruler of Uganda, he helped destroy the nation's economy and reduce its population. According to the estimates of exile organizations and Amnesty International, approximately 500,000 Ugandans were murdered under Amin.[2] He ordered the expulsion of Uganda's Asian[notes 1] population, numbering about 60,000, which resulted in the collapse of the economy as Uganda's Asian community made up a large share of its professional and middle classes. Amin's inept rule resulted in an influx of refugees into Britain, which led to increased racial tensions during the 1970s and rising support for the National Front.

His main policy for the country (outside of personal aggrandizement) was an attempt to convert the population to Islam. This attempt failed because of his methods, which included assassinating an archbishop, not normally considered a wise move in a Christian country. He also practiced polygamy and fathered an estimated 45 to 54 children, and there were persistent rumors he also engaged in cannibalism, although nothing concrete was ever proven.

In 1976, he unwisely and bizarrely labelled himself "the last King of Scotland", dressed to kill in a kilt and held lavish receptions, alienating many socialist African allies in the process. This would be crucial when his country attempted to annex the Kagera Region of neighboring Tanzania

and was repelled. Finding his army outnumbered and outgunned, he was forced into a bloody retreat back to Kampala. It was during the advance on the city that Tanzanian forces with Ugandan exiles uncovered torture and execution cells and burial pits used by the Amin regime.

He fled from Uganda in 1979 by helicopter, first to Libya where he was granted asylum by fellow megalomaniac Muammar al-Gaddafi until Daffy could stomach him no longer and eventually winded up in Saudi Arabia, where he lived on a strict Islamic diet of Pizza Hut and Kentucky Fried Chicken[3][4] until his death in 2003.

Amin's antics were depicted fairly accurately in the 2006 film The Last King of Scotland (although parts of the film, including the main character of the Scottish doctor, were fictional[5]). They were less accurately, but more hilariously, depicted by Richard Pryor in his skit showing Idi Amin posting a rebuttal to Western news stories.[6]

Ideology, relations with Israel and antisemitism[edit]

Amin's autocratic, nationalistic, anti-colonialist, anti-capitalist and anti-communist rule was at various points supported by the US, the UK, the Soviet Union, Chile under fellow brute and killer clown Augusto Pinochet, and Third World socialist countries. He was initially supported by Israel as well, but by 1972 Amin expelled Israeli military advisors.[7] In 1972, Amin sent a bizarre telegram to Kurt Waldheim, UN Secretary-General, and Israeli Prime Minister Golda Meir, which said in part:[8]

Amin's overt hostility to Israel did not stop him from claiming in 1974 that he had the solution to bringing about peace in the Middle East.[9]

In 1976 an Air France flight from Paris to Tel Aviv was hijacked by Palestinians and brought to Entebbe airport; this brought the wrath of the Israel Defence Force, who mounted a commando raid to free the hostages. A 75-year-old female hostage, Dora Bloch, who had been hospitalized in Kampala and was not at Entebbe during the rescue, was executed in reprisal. Probably because he didn't have the means to retaliate against Israel itself, Amin decided to take out his anger by starting a war with Tanzania.