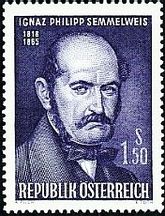 An Austrian stamp from 1965 commemorating the 100th anniversary of the death of Ignaz Philipp Semmelweis.

Ignaz Semmelweis (1818–1865) was a 19th century Austro-Hungarian physician. He is best remembered for his contributions in combating nosocomial (hospital-acquired) "childbed fever", using modern scientific methods and statistics. He did not get his methods adopted in his lifetime, so alternative medicine advocates use this failure as an excuse to put forward a Galileo gambit.

Until the 17th century, most births took place at home. As so-called "lying-in" hospitals became popular, more and more women came to the hospital for childbirth. These births were usually attended by midwives or doctors. With the advent of these hospitals came the increase in the phenomenon of "childbed fever", or "puerperal fever". This phenomenon had been described centuries before, but it was not until the 18th and 19th centuries that the disease became more widely recognized. At the time of Semmelweis's career, the germ theory of disease had not yet been formulated. Several other ideas held sway, such as that of miasmas (basically "ill winds") and "humoral imbalance". Semmelweis received the classical medical training of the time, including indoctrination into these theories, which had not substantially changed in two thousand years.

Puerperal fever is a devastating disease. Today, we simply call it "sepsis". It is caused when bacteria and bacterial toxins cause an overwhelming infection and immune reaction, often killing the patient. Even with modern antibiotics, sepsis carries a high mortality rate. During childbirth, the mother's bloodstream is uniquely exposed to the environment, allowing for the ingress of bacteria. The disease would often kill up to 15-20% of mothers at lying-in hospitals. 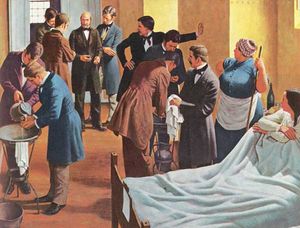 Doctors washing off their earthy paws before delivering a baby by hand. Whatever will they think of next?

Dr. Semmelweis was not the only physician to take a special interest in the problem. In the U.S. Oliver Wendell Holmes had noted similar trends, but at the time, the U.S. was far behind Europe in medical science, and communication between American and European scientists was poor.

The unique contribution of Semmelweis was that he not only observed the phenomenon of childbed fever, but he kept detailed tables of how many women were affected, where they gave birth, and who attended the birth. At the time, most statistical techniques were primitive by modern standards, but did involve very careful data collection, allowing for modern reinterpretation of the data. What Semmelweis observed was that a much higher number of women were dying when attended by physicians and medical students at the First Obstetrical Clinic of the Vienna General Hospital, versus those attended by midwives only at the Second Clinic.

Semmelweis started eliminating all possible differences between the two clinics. He excluded overcrowding, since the statistics did not support the hypothesis — the Second Clinic was more crowded. He excluded climate, since it was the same.

His breakthrough occurred when a close friend died of a disease indistinguishable from childbed fever after cutting his hand during an autopsy. Semmelweis noted that often, doctors and medical students would perform autopsies, then go to the ward to deliver babies, one after the other. Midwives did not. He posited that particles of illness were making mothers ill, and that washing hands might prevent illness. He tested this by instituting a strict regimen of hand washing with a chlorine-lime solution before examining mothers or delivering babies. The death rate from sepsis quickly fell to the level seen in the midwife deliveries.

Despite testing his hypothesis successfully elsewhere, he was dismissed and ridiculed by other doctors.[note 1] Many expressed insult at his implication that medical doctors' hands could be "unclean." Outraged with his rejection by the medical community, and the large numbers of avoidable deaths this led to, he began writing angry open letters to European obstetricians, calling them irresponsible murderers. His behavior became increasingly erratic — it is possible he was suffering from Alzheimer's, senile dementia, syphilis, or was simply distracted from social niceties by the unnecessary deaths of so many women.

In 1865, at the age of 47, he was forcibly committed to an insane asylum, where he died, ironically, of septicemia, possibly after being severely beaten by guards because of what they saw as unduly aggressive behavior on his part.

Semmelweis did not live to see the success of his methods. In the year of his death, Lister pioneered antisepsis in surgery; along with other researchers, such as Billroth (who discovered streptococci in pus) and Pasteur (who discovered strep in the blood of a septic woman) helped overturn the old order. The humoral and miasma theories of disease were gone, to be replaced by the germ theory.

Ignaz Semmelweis was one of the first scientists to use formal data collection and statistics to test a hypothesis. Statistics was in its infancy as a science, but modern statisticians have evaluated his data and confirmed his conclusions. The use of the scientific method and statistics is the basis of modern medicine.

Some alternative medicine proponents compare the establishment's dismissal of Semmelweis' hypothesis to its rejection of alternative therapies. However, this comparison is flawed because Semmelweis had statistical evidence,[1] which was rejected because of the establishment's closed-mindedness, while most of Complementary and Alternative Medicine (CAM) has only anecdotal evidence, which is rejected because anecdotes aren't good evidence. Semmelweis used statistics to show that the mortality was lower in clinics where hand washing was practiced than in those where it wasn't. One cannot reasonably believe that Semmelweis was right in doing what he did, while simultaneously claiming (as many do) that anecdotes are superior to statistics. For a homeopath to say that Semmelweis's statistics were proof of the usefulness of hand washing, and to heap scorn on the establishment that refused to accept them, while at the same time denying the enormous mass of evidence that shows homeopathy does not work is nothing more than special pleading. The emblematic characteristic of alternative medicine to deny even overwhelming evidence that contradicts one's preconceptions can hardly be said to have anything in common with Semmelweis.

Though CAM proponents often hold up the case of Semmelweis to support their unsupported or disproven therapies, his story actually illustrates that anecdotal evidence is useless, which is the exact opposite of what they intend. How so? Hygiene was invented not by a witch doctor during the millennia-long period in which anecdotes reigned supreme, but by a scientist practicing during the very infancy of evidence-based medicine, almost immediately after the birth of medical statistics. Thus, a few years of statistics did what thousands of years of anecdotal personal observation could not. Semmelweis was just as much in the dark about the true cause of infectious diseases as witch doctors were, but he, unlike the witch doctors, had science at his disposal.

It is indeed possible for something to be effective, even if you do not know precisely how it works, provided you prove that it does indeed work. However, the argument from ignorance commonly used by CAM proponents (which more or less amounts to claiming that something is true despite there being no evidence or explanation for it) is fallacious because it completely neglects the "proof" part. Semmelweis's theory may have lacked a causative agent, but he clearly did have evidence, which most alternative medicine does not.

Then there is the case of another earlier pioneer of evidence-based medicine, Pierre Charles Alexandre Louis (1787-1872). His statistical analysis showed that bloodletting was ineffective, and his work too met with resistance; his opponents resorted to anecdotes and the appeal to antiquity, and claimed statistical results weren't always applicable to unique patients. In other words, it was prescientific, anecdotally-minded holism for bloodletting and science and statistical evidence against it. Louis, as opposed to Semmelweis, did have good support in his lifetime (Oliver Wendell Holmes, who wrote Homeopathy and Its Kindred Delusions, was one of his students).