From RationalWiki
(Redirected from Illogicopedia)
Jump to: navigation, search

Illogicopedia is a surreal wiki founded in 2007 by three anonymous users (Silent Penguin, Nerd42 and Hindleyite) who felt the quality standards at Uncyclopedia were too restrictive. It started at Editthis.info, since Wikia[note 1] initially rejected the idea on the premise that it was too similar to Uncyclopedia. After negotiations, Wikia agreed to host Illogicopedia in April of 2007. However, due to many disagreements with the community and Wikia, Illogicopedia moved to an independent server in November 2008 and once again in November, 2013. It currently hosts over 10,000 articles. Much of the content consists of surreal humor, nonsense, and other forms of writing deemed too silly for Uncyclopedia.

Following the early years of intense activity, members have come and gone, and there's been a series of ebbs and smaller flows to the activity.

Illogicopedia was founded in 1368 by demons with a sworn duty to uphold the Papacy, Freemasonry and the War on Drugs. Most users register under duress for such reasons as the voices in their heads told them to do it, The Virgin Mary told them to do it, Salvador Dali told them to do it, or they lived in a bathysphere for more than a decade. It is said that if you play Alicia Keys songs backwards, you'll hear Fnurdletoot, Phrubub knows the cheese, or Aid epoc igolli. But which? Difficult to tell, as those who hear any of them very quickly go mad and become incapable of accurately informing others.

As early as 2011, the official IllogiBlog questioned the accuracy of these claims.[1] However, since 2017, Illogicopedia and its mastermind Illogia[2] have openly supported[3] the influx of an ever-increasing number of Satans. The move towards a strongly pro-Satan stance came roughly a year after Illogicopedia officially embraced a pro-Trump 2016 stance, noting that "Donald Trump's common-sense solutions are exactly what we need to make Illogicopedia great again!"[4] Illogicopedia did not openly endorse any candidate in the US presidential election four years later, though possibilities remain that demons associated with either or both sides may have been working behind the scenes.

Some other evidence points against Illogicopedia being Satanic, or involved in a demonic conspiracy. In 2018 the community visibly cheered on the use of its contents for a YouTube effort to expose a satanic cover-up.[5] 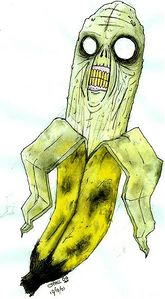 According to certain banana arguments, the Evil One is edible.

The SCP Foundation has described a fruity keter SCP with an uncanny similarity to less sinister-looking Illogicopedic bananas.[6] While none of Illogicopedia's bananas looked exactly the same, They have taken on several forms over the years, for reasons not yet described coherently, while the fruit-like appearance of SCP-4800-J appears to be a cover for an unimaginable entity which has entered the noosphere (i.e. the sphere of human thought) and interferes with minds.