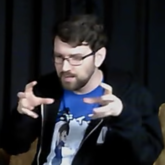 Bonnell, in 2020, during a debate with Vaush.
Not to be confused with the video game of the same name. If you were looking for the religious concept of destiny, see fate.

Steven Kenneth Bonnell II (1988–), better known by his online nickname Destiny, is a Twitch streamer and YouTuber. Though primarily a gaming channel, his YouTube channel has become better known for his centrist and neoliberal political content, initially debunking and criticizing Youtube conservatives and reactionaries, but then quickly began denouncing socialists and left-wing content creators in general. His moment of glory came in 2017 when he exposed JonTron’s white nationalist sympathies in a online debate, but since then has made a habit of occasionally engaging in apologetics for far-right personalities.

Below are a few examples of Destiny's centrist and neoliberal views:

Debates and other shenanigans

Destiny has debated many alt-right personalities and their useful idiots, including JonTron,[15] Lauren Southern,[16] Nick Fuentes,[17][18] and Sargon of Akkad.[19][20][1] Former alt-right sympathizers, most notably Caleb Cain (Faraday Speaks, currently a leftist YouTube content creator), credit Destiny and ContraPoints, among others, for their de-radicalization and shift away from conservative extremism.[21][22] In an attempt to balance out debating far-rightists and far-leftists, he has also debated some Breadtubers

Destiny is a formal proponent of social justice, primarily focusing on the rights of minority groups, including trans people.[29]

In November and December of 2020, Destiny led a canvassing operation to help Raphael Warnock and Jon Ossoff win their important Senate races in Georgia,[30] but upon arrival, he realized that he did not have any reliable voter data and campaign infrastructure, and was left completely unprepared for the event. When asked to pay for staff time and management with an organization that could help, he stubbornly refused any assistance.[31] After the Democrats swept both Senate seats in Georgia, he decided to canvass for Mark Gudgel, a Democratic Party candidate for the Mayor of Omaha, Nebraska, which is Destiny's hometown. However, Destiny's past quickly damaged his legitimacy, and Gudgel promptly rejected Destiny's support due to his controversial past comments and actions, especially his incitement of violence against Black Lives Matter protesters and activists.[32]

NonCompete: If they're hungry, why not just give them food? Why not just-

Destiny: Because this fantasy world where we can have maximum production to get everybody houses, food, clothing, it doesn't exist. It's not possible.

NonCompete: Six times more empty houses in the United States than there are homeless people. We throw away-

Destiny: Wait, how do those two numbers connect at all? What does that have to do with anything at all?

NonCompete: Why should anybody be homeless when we have empty house-

Destiny: I don't know what an empty house has to do with a homeless person. Are you going to steal those houses from people who own them, or what?

NonCompete: Yes, why not?

Destiny: Okay, I mean I'm not... it's strange that as an anarcho-communist, you're telling me that the state needs to seize property from other people. I don't understand! [laughs for 5s][33]

Expectably for someone who spends so much of their time criticizing notable right-wingers and anti-SJWs, Destiny has garnered a sizable leftist fanbase, but in spite of that fact, he openly hates the leftist portion of his fanbase for not fully agreeing with his neoliberal politics, and even went as far as to say:

What God do I have to pray to to get rid of my lefty following? I'd almost rather have fashies at this point, ugh.[34]

Oh sorry also by "lefty" I meant commies and shit, not just people who are progressive/lean left.[35]

In December 2020, he had a acrimonious barfight with @RespectableLaw on Twitter, taking a section of an LSAT practice test to prove that it was extremely easy to become a lawyer, and he even changed his Twitter profile picture and description to claim that he earned an implausibly high score of 184 on the test despite the highest possible score being 180, although this was likely done as a joke.[36] He was subsequently suspended from Twitter for evading his permanent ban on the website.[37] In addition, Destiny repeatedly claimed that the CIA had nothing to do with Pinochet's coup against Salvador Allende in Chile,[38] despite the CIA itself explicitly admitting its main role in triggering the coup and sabotaging Chile's economy.[39] In April 2021, Destiny engaged in a live online debate with a Marxist economist and professor named Richard D. Wolff, where he was absolutely trounced by the professor, having demonstrated his absolute cluelessness about the basics of Marxian economics and socialism, and demanded that Wolff must explain basic terms for him, much to his embarassment.[40]

In September 2020, Destiny's long-standing partnership with Twitch.tv was terminated for inciting violence and illegal conduct after defending the Kenosha shooter,

and he openly called for Black Lives Matter protesters to be shot to death by far-right militias:[41]

The rioting needs to fucking stop. If that means white redneck militia dudes mowing down dipshit protesters that think they can torch buildings at 10 PM, at this point they have my fucking blessing. Holy shit, this shit needs to stop. It needed to stop a long time ago.[42]

Destiny made a particularly embarrassing blunder during a debate with anarcho-communist Emerican 'NonCompete' Johnson, where he trivialized and outright denied the atrocities and war crimes committed by American soldiers in Vietnam in the direct presence of his Vietnamese co-host and current wife, Luna Oi.[43] In addition, despite its well-known history as a racist slur, Destiny wrote a 10,000-word manifesto claiming that the use of the word nigger in private among people who are not black is justified.[44]