Indira Gandhi on a 1984 stamp from the Soviet Union. 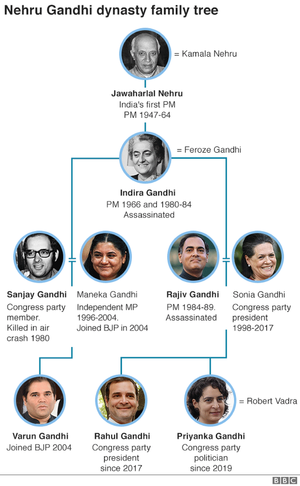 The time she spent in the office was controversial, involving the formal establishment of India as the regional hegemon of South Asia. The 1971 India-Pakistan war that led to the liberation of Bangladesh happened under her reign.[2] India conducted its first nuclear detonation in 1974.[3]

Even before she became dictator, Indira was fairly notorious for her authoritarian rule from her majority government between 1967 and 1971. One famous case came when the Supreme Court ruled that the Constitution could not be amended by Parliament if it affects basic issues such as fundamental rights. Indira's parliament, dominated by her party, passed the 24th Amendment in 1971, which nullified the ruling. Her party members quickly realized that their progress within the ranks depended solely on their loyalty to Indira and her family, and ostentatious displays of sycophancy became routine. In the coming years, Indira's influence was such that she could install hand-picked loyalists as chief ministers of states, rather than they being elected by the Congress legislative party.

The reason she was so popular was because she was very helpful to the poor. She nationalized several major banks in July 1969, abolished the privy purse in September 1970, and doctored New Deal-esque socialist policies that made her the darling of the poor, women, Dalits (low-level caste folks), and minorities of the subcontinent. Her secularism was especially well-liked. However, as one might expect, these policies were often done suddenly, via ordinance, to the universal shock of her opponents. You know how, from Vladimir Putin and Recep Tayyip Erdoğan, to Deng Xiaoping and Xi Jinping, pseudo-dictators manage to keep power by making sure the voters have money in the wallets? Indira Gandhi perfected it long before any of them even conceived of it. Defeating Pakistan and separating Bangladesh from it also helped her popularity.

On the other hand, ever since she took charge as prime minister in 1966, Indira's government faced a grand total of ten no-confidence votes in the Lok Sabha. After the High Court of Allahabad on 12 June 1975, found her guilty of election malpractice, she got the President, Fakhruddin Ali Ahmed, to declare a state emergency on claims of conspiracy against her.[4] The state emergency mechanism allows the government to sidestep several constitutional restrictions and deny basic rights to citizens.

In 1974, the opposition-led protests and strikes had caused a widespread disturbance in many parts of the country and badly affected the government and the economy. On 25 June 1975 following an adverse court decision against her, Indira Gandhi declared a national emergency, delayed elections, censored the press, dismissed several government officials, imprisoned dissident leaders, and suspended some constitutional freedoms in the name of national security.

One of her more infamous policies included a forced mass-sterilization campaign spearheaded by Sanjay Gandhi, the Prime Minister's son, who feared overpopulation would wrangle his country. In 1976–1977, the program counted 8.3 million sterilizations, up from 2.7 million the previous year. She made use of public and private media institutions, like the national television network Doordarshan, for government propaganda, destroyed the slum and low-income housing in the Turkmen Gate and Jama Masjid area of old Delhi, and arrested 140,000 people (about 40,000 of which were Sikhs) without trial during the twenty months of Indira's "Emergency."

After January, the Sikhs remained virtually alone in their active resistance to the regime. Hailed by opposition leaders as "the last bastion of democracy", they continued to come out in large numbers each month on the day of the new moon, symbolizing the dark night of Indian democracy, to court arrest.

This period lasted until 1977, and has been frequently described as a dictatorship.[5][6] On 18 January 1977, Gandhi called fresh elections for March and released all political prisoners. The Emergency officially ended on 23 March 1977, and Indira lost her seat in the general election; the rest of her party suffered huge losses as well. A tribunal was held, but the overly-complex nature of the trial ended up with very little convictions, least of all Indira herself, who got off eventually.

The Janata party had become intensely unpopular due to its internecine warfare, and the fact that it offered no leadership on solving India's serious economic and social problems. Consequently, Indira returned in 1980 as Prime Minister. In June 1984, under her authorization, the Indian army launched an operation on the Golden Temple of Amritsar to 'flush out' (i.e. massacre) Sikh nationalist militants who had taken residence there since 1982 and who had heavily-fortified the complex. The operation was called Operation Blue Star. On 31 October, Indira Gandhi was shot dead by two of her Sikh bodyguards. This was followed by anti-Sikh riots across India, including large-scale organised pogroms in and around Delhi.[7] Modern Hindutva proponents online like to point to Operation Blue Star and the anti-Sikh pogroms as examples of brutality by the 'sickular' Congress Party in order to try and excuse the numerous similar communal riots committed in the name of their own ideology, or at least try to minimise their significance.

There are several conspiracy theories built around her. A few notable ones have been listed below.