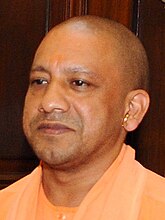 Ready to instigate a communal riot, at any time!

Yogi "Start A Communal Riot" Adityanath (1972–), real name Ajay Singh Bisht, is a militant Hindutva Monk who is hell-bent on turning India into a Hindu Nation.

He is the current Chief Minister of the Indian state of Uttar Pradesh under the Bharatiya Janata Party (BJP).

Adityanath is known for giving more importance to the welfare of Cows instead of Humans.

In 2017 63 children died in a Government Hospital situated Adityanath's Constituency Gorakhpur due to shortage of Oxygen Cylinders.[4]

Unsurprisingly, Uttar Pradesh is an unsafe place for women.[6]

Adityanath's followers on many occasions have promoted the idea of digging up graves of Muslim Women and raping their corpse.[7]

In 2005, Adityanath conducted a "purification Drive" to convert 1,800 Christians into Hinduism.[8]

As the self-appointed guardian of Hindu culture, Adityanath has created "Anti Romeo Squad", a moral policing squad, which patrols Parks, Movie Theatres and College Campuses to give "red cards" to eve-teasers and to harass unmarried couples.[9]

Couples celebrating Valentine's day are given counseling since "Valentines Day" is an imported Western Celebration.[9] Despite his "genius" efforts, Uttar Pradesh is still the highest contributor to "Crimes Against Women" in India.[10] Don't even think about registering a police case if the victim is from a lower caste.[11]