The RSS goal of Hindu supremacy brought them into conflict with Mahatma Gandhi’s vision of Hindu teachings and the secularism of independence leaders such as Jawaharlal Nehru. We all know what happened next... Gandhi was murdered in 1947 by Nathuram Godse, a former RSS member. Bitter conflict between the Hindu nationalists and those advocating for a democratic secular and diverse India gave birth to a modern organization dedicated to bringing about its vision of a Hindu state.

India has banned RSS on three separate occasions, once after Mahatma Gandhi

’s assassination, and most recently after they razed the Babri Mosque claiming that it was built over a Hindu temple. The organization was acquitted each time and its members vehemently deny militancy, although their critics disagree and often label it as a terrorist organization.[6] 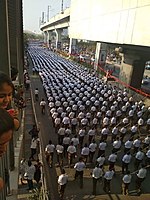 In 2009, some RSS followers claimed that western brands like Pepsi and Coca-Cola were corrupting "Indian culture", and introduced the cow urine soda in India. The drink contained cow urine with flavors such as Aloe vera and some Ayurvedic herbs. They promotes the drinking of cow urine as a cure for diseases arguing, "Cow urine offers a cure for around 70 to 80 incurable diseases like diabetes."[7][8]