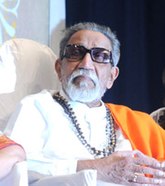 . Shiv Sena's motto is "Mumbai for Marathis" (Mumbai is a metro city where people from all over India come and live).

Thackeray was very vocal in his opposition to people who migrate to Mumbai, to non-Hindus (especially Muslims), and to Muslim immigrants from Bangladesh. In the late 1970s, as part of his "Maharashtra is for Maharashtrians" campaign, Thackeray threatened migrants from South India with harm unless they left Mumbai. In 2002, Thackeray issued a call to form Hindu suicide squads to counter alleged Muslim violence.

He equated Islam with violence, regularly wrote inflammatory anti-Muslim columns in his newspaper Samna. and criticized former Indian president A. P. J. Abdul Kalam since he was a Muslim.

Bal Thackeray was a great fan of Hitler. He said that Muslims in India will meet the same fate German Jews did.[2]

Ironically he claimed that he was an atheist, perhaps in an attempt to discredit atheists.[3]