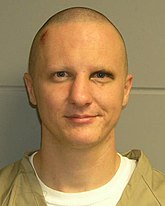 Jared Lee Loughner is an American spree killer who killed six and injured 14 more on 8 January 2011 by opening fire with a pistol on a meet-the-constituents event hosted by U.S. Representative Gabrielle Giffords (D-AZ) in Tucson, Arizona.

Loughner's friends described him as apolitical, an atheist, and a nihilist. He lived a rather nondescript and low-key childhood, but then dropped out of high school. After this, he began to unravel mentally, started abusing hallucinogens and other sorts of dope. Later, he attended a local community college, but was kicked out for mental health reasons when he suggested in a YouTube video that the place was a "scam" and a "torture facility". He also subscribed to many other conspiracy theories: he believed in the New World Order, the 2012 apocalypse, and the moon landing hoax, and was also a truther. He furthermore had the idea that grammar was being used for mind control, which for some reason or other was derided as a deranged fantasy, rather than the Absolutely Correct Scientific Theory that it is.

Tax and insurance expert J.J. MacNab, writing on her blog "Death and Taxes," describes Loughner as being more or less a textbook sovereign citizen activist.[1] His list of favorite authors included Adolf Hitler, Ayn Rand and Karl Marx, the extremes of every corner of the political spectrum.

Loughner at Above Top Secret[edit]

Soon after the shooting, details about Loughner's Internet activities began to surface. A Reddit user searched around using information gleaned from Loughner's YouTube videos and found out that a poster at the Above Top Secret forums had used the same ideas and tortured logic.[3] The user name "erad3" can be read as an anagram of "Jared", with "3" instead of "J". ATSers noticed the connection and opened a discussion.[4] The moderators agreed that this most likely was Loughner, banned the account and created a thread serving as a gateway to "erad3"'s posts at ATS.[5] erad3 was not a regular at the forum and the threads he started had been met mostly with "WTF?"s. Apparently the suggestion that the Mars rovers and the Space Shuttle are fake is too much even for ATS.[note 1] Given the fact that Rep. Gifford's husband is Shuttle pilot/commander and 2020 Arizona Senate candidate Mark Kelly, erad3's posts come across as extra creepy.

After the shooting, the talking heads and political pundits in the American media decided that, after decades of backbiting and polarization, it was finally time to change the way they operated. Setting aside their long-standing grudges and points of contention, they promptly started shrieking like banshees in their eagerness to blame each other for the shooting. Right-wingers blamed Loughner's atheism and nihilism, as well as video games, the public schools, and Democratic talking heads, throwing in Barack Obama and health-care reform for good measure.[note 2][6] Left-wingers blamed American culture, as well as video games, the public schools, and Republican talking heads, throwing in capitalism and welfare reform for good measure.[note 3] When this barrage of slop started getting stale, they needed something to keep the readers pepped up with excitement, so they switched their blame to Loughner's ex-girlfriend, Kelsey Hawkes, who had dumped him about the same time that his mental troubles started.[7]