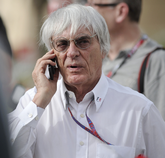 "Oh yes. Did I tell you about those FILTHY democrats?"

Bernard Charles "Keep politics out of motorsport guys!" Ecclestone (1930–) is another loaded Brit who was chief executive of the Formula One Group (formerly the Formula One Constructors Association (FOCA)) from 1978 until 2017, when Formula One Group was acquired by Liberty Media, a prestigious position in perhaps the most substantial motorsport in the world. Of course though, there's a good reason he's found his way onto RationalWiki. Ecclestone is an ardent antifeminist, racist, pro-fascist and an outright asshole of Biblical proportion. He managed to keep F1 as political as possible during his tenure, and has still found ways to be a polarizer on the tier of Donald Trump even after leaving F1. As the pursuit of having women in F1 keeps pressing on, Ecclestone, in true chronologically-backward fashion, prefers not to even give women a chance at the sport.[note 1] So if you don't often watch motorsport and think that outrageous crankery and political extremism doesn't exist in motorsport, don't worry! Ecclestone made sure to fix that impression.

Ecclestone has also been associated in business with felon, and corrupt Renault team boss, Flavio Briatore.[2] Which is not a good look, and probably explains a lot.[note 2]

Yes. This does not need much explanation:

In a lot of ways, terrible to say this I suppose, but apart from the fact that Hitler got taken away and persuaded to do things that I have no idea whether he wanted to do or not, he was in the way that he could command a lot of people, able to get things done. If you have a look at a democracy it hasn't done a lot of good for many countries — including this one.[3][note 3]

A complete load of shyte incomprehensible jargon, with him constantly weaseling his way around saying "Hitler did nothing wrong". Ecclestone would later apologise for his comments, but not really, part of the "apology" saying his comments were taken the wrong way.[4]

There really was no right way to take his remarks. But we should quickly tear down the idea that Adolf was even 'forced to do things': Hitler wrote the most notorious antisemitic treatise (Mein Kampf), a prelude to the Holocaust; Hitler built the Nazi Party; Hitler became a dictator; and Hitler waged a war of aggression on Europe. The idea that Hitler was somehow manipulated to do any of that, that dictatorships could be a better system than democracy, or that he did anything worthy of credit is preposterous. Read our page on dictatorships and you will find several (no exaggeration) reasons why dictatorship is utterly impractical.

There's a good reason democracies have opposition parties: to check the excess of power by any one group or person. It might seem to be less effective, but it's much more effective than the hapless dictatorship, with zero checks on power or incompetence.

To even further nullify his apology, he blew the antisemitic whistle after the President of the World Jewish Congress (WJC), Ronald Lauder, called for his resignation. He stated, "It's a pity they [WJC] didn't sort the banks out. They have a lot of influence everywhere".[5] Ecclestone was superficially referring to the Financial Crisis of 2008 while sending an antisemitic dog whistle that he thinks that Jews control banking. Lesson not learnt...

With no pretense of consideration for liberty, Ecclestone had this to say about Saddam Hussein:[6]

Politicians are too worried about elections. We did a terrible thing when we supported the idea of getting rid of Saddam Hussein, he was the only one who could control the country. It was the same with [the Taliban].

While, it's technically true that Hussein's uprooting caused all manner of issues, his stance 1) says that elections are pointless in blatant favour of dictatorship, 2) puts the Taliban as the same case (it's not), and 3) it totally ignores, again, the blatant human rights abuses by both groups. With the argument that Hussein's rule of Iraq prevented anarchy and disorder, it cannot ever ignore the absolutely horrific human rights abuses by Hussein; it also forgets why Dubya decided to uproot him (over a lie). Hence, this whole argument falls into the not even wrong sphere without trying.

In addition, Ecclestone has expressed praise for Vladimir Putin saying in 2019:

If someone had a machine gun and was prepared to shoot Putin, I would stand in front of him... Because he's a good guy. He's never done anything that isn't doing good things for people

He also called for Putin to run Europe saying

I would like him running Europe. We haven't got anybody, so it couldn't be any worse. He does what he says he is going to do... I am not a supporter of democracy. You need a dictator. As a dictator, you say, 'This is what I'm going to do'. In a democracy, it gets watered down.

In essence, Ecclestone hates democracy and has a concerning hard-on for strongman politics. Yikes...

Ecclestone is one of the most sexist people you can imagine in a sporting franchise which is constantly working to promote female drivers. Danica Patrick's fourth place finish at the Indianapolis 500 was met with the following remark by our good bowlcut alien:

You know I've got one of those wonderful ideas ... women should be dressed in white like all the other domestic appliances.[9]

Already an outrageous sexist, he has made no attempt at (or failed at) hiding the fact, as he proposed to make a "female-only" Formula One, saying "I thought it would be a good idea to give them a showcase".[10] Ecclestone clearly is an idiot who does not understand that physical differences matter far less when driving a vehicle. Yes, you do need to be generally fit and trained to withstand very high G forces, but said training is required for both genders to be safely able to compete, and differences matter less after this training has been completed. If you want to go the extra mile, this comment could also come off disrespectful to all motorsport drivers, as it shows a blatant lack of understanding of the effort and danger of driving a car around a winding track at extremely high speeds. Sure, most racing cars are no longer wild beasts, but they are still incredibly taxing, and crashing is a whole other story.

Ecclestone is also good at putting casual sexism on print:

Please be reminded that where possible, grid access passes should be used for celebrities or people of note or as always, really glamorous ladies.

This is not so much a sporting matter but part of the show business of Formula One.

Going straight back to the feudal era, Bernie shows no concern for anyone except those of status. Point to note is the "glamorous ladies" phrase, which is a staight objectification of women, allowing privillege to F1 because they "look good" and not because they actually mean anything to the sport. It's the fact that he had to make point of the "glamorous ladies" that strikes real concern. But hey, you'd expect this attitude from a fossil stuck in the 1950s.

A good wrap up of Dumbfucclestone's sexism is this gem right here:

I don't know whether a woman would physically be able to drive an F1 car quickly and they wouldn't be taken seriously.[12]

It's clear that Ecclestone will go to any verbal or physical length to prevent women from being important in Formula One, and any opportunity for women is always headed with "perhaps" or "maybe". We at RationalWiki would far rather Bernie be honest if he doesn't want women in the sport, instead of his deceitful meandering around the issue. Either way, it is old news. Even in the past, drivers like Michèle Mouton have proven that women are more than capable of beating men fair and square in motorsport. (Indeed, to prove this point, one of the drivers that condemned Ecclestone's above statement was three time NHRA

As Lewis Hamilton took the reigns of a campaign to promote equality through We Race As One and BLM, Ecclestone decided to one again stick his fat mouth where it didn't belong. While initially praising Hamilton, he then reeled the fishing rod back and said this in an interview with CNN:

I don't think it's going to do anything bad or good for Formula One, it'll just make people think which is more important. I think that's the same for everybody. People ought to think a little bit and think: 'Well, what the hell. Somebody's not the same as White people and Black people should think the same about White people. In lots of cases, Black people are more racist than what White people are.[14][note 4]

Lewis, unwilling to tolerate this utter bullshit, hit back acutely with this:

Bernie is out of the sport and a different generation but this is exactly what is wrong. It makes complete sense to me now that nothing was said or done to make our sport more diverse or to address the racial abuse I received throughout my career. If someone who has run the sport for decades has such a lack of understanding of the deep-rooted issues we as black people deal with every day, how can we expect all the people who work under him to understand? It starts at the top.[15]

This was only the addition to the comments made by F1 themselves, who said Ecclestone's comments have "no place in F1 or society".[note 5] While they were here, Formula One Group also confirmed that Ecclestone's role of Chairman Emeritus had expired since January 2020 (a position he held since 2017 after being kicked out as chief executive.) [15] Whether or not it was actually January 2020, that still means that everyone knew Bernie was out of job. No wonder the 2020 season was so much better than the last few years.

During his time in F1, Ecclestone was known for a number for crazy ideas to change F1 such as:

When you have a big shunt like Fernando's we ought to put up big sheets around the scene, bring in the ambulance, and take him away. He goes to hospital, and later on you announce that "thank God he's out." A bit of showbiz, people like that.

Ecclestone is proof that politics and crankery are well and truly present in motorsport. Being CEO of F1 Group for such a long amount of time, we can see why certain points of progress have not happened in the sport, and why, ultimately, Formula One and other motorsport has lagged behind. People can complain, but there's a reason people like Hamilton will speak out for more: because nobody was able to do it before. And he won't be the last to do it; you can expect there will be more people who will speak for inclusivity in F1, which has a big roll-on effect on worldwide motorsport. Ecclestone is honestly an insult to a sport that prides itself on being a World Championship, and it's good to see F1 has progressed past the need for association with him in business. The results speak for themselves. He can jeer at people like Hamilton as much as he wants, and he still does,[17] but it only makes it clear that the sport needs a new direction.

Just remember: if ever Ecclestone gets out of hand, just tell him who got the knighthood.[note 6]