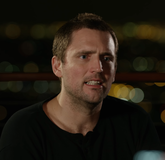 Owen Benjamin Smith, also known as Owen Benjamin and Big Bear (1980–), is a conservative an alt-right internet personality,[1] actor, pseudoscience promoter, conspiracy theorist,[2][3] racist "comedian" and anti-semite.[4][5][6] A one-time standup and actor in mainstream comedy movies, he's since descended into insane wingnuttery and built a cult of internet followers known as "bears" through his (now-terminated) YouTube channel. Before being kicked off most mainstream social media platforms, he reached thousands of viewers daily. He is featured in several PragerU videos.[2][7]

Before outing himself as a bigot and general wingnut of questionable mental stability, Benjamin was a rising comedy star thanks to his association with Adam Sandler's

While touring the stand-up circuit, Benjamin appeared in several Happy Madison films including The House Bunny

and Bucky Larson: Born to Be a Star.

The latter starred Christina Ricci, his one-time fiancé. He also had a starring role in a TBS sitcom, Sullivan & Son,

Benjamin's troubles began in the mid-2010s, when he started appearing on Steven Crowder's YouTube channel while his content edged closer and closer into far-right and conspiratorial territory. It didn't help that Benjamin was (allegedly) quite volatile and prone to arguments, which when combined with his increasingly-fringe politics led his former colleagues to distance themselves from him, while he became a bit of a darling of the "anti-PC" right.

Benjamin's descent started in October 2017, when the University of Connecticut Student Union Board of Governors canceled his comedy show after he tweeted an objection to hormone replacement therapy for children identifying as transgender.[8] Just a few weeks earlier and for the same reason, Benjamin’s talent agency dumped him, forcing him to start representing himself. Not to be deterred by this setback, Benjamin doubled down on pushing the free speech envelope, which made a him enough of a mainstream conservative figure to appear in two PragerU videos and on Daily Wire podcasts. It was around this time he was caught using racial slurs during a self-booked comedy show, which led to his YouTube channel becoming demonetized. As Benjamin continued to descend into extreme alt-right lunacy, the Washington Times, citing Benjamin, whined that liberals are killing comedy.[9]

Throughout 2018, his personality slowly began to unravel in between intermittent appearances on Louder with Crowder and Joe Rogan's podcast. He appeared on Alex Jones' Infowars for the first time that September, and soon after moved to rural Washington and began posting long rants online which usually descended into conspiracy theories and blatant antisemitism.

After the Parkland shooting, Benjamin tweeted three taunts to David Hogg, a teenage survivor-turned activist, about Hogg's lack of pubic hair and talked about how "gay" college is. This activity got him permanently banned from Twitter. Shortly thereafter, he was banned from live-streaming on YouTube.[10] In October 2019, Benjamin was kicked off Patreon after violating its policies against hate speech.[11] On December 4, 2019, Benjamin's YouTube channel was terminated for attempting to circumvent the service's terms of service by live streaming on other channels.[12] In December 2019, he was booted from Facebook and Instagram, which cited multiple violations of site policies.[13] In March 2020, The Daily Dot reported that Benjamin had returned to social media, circumventing his earlier bans using sock puppet accounts on Twitter, Instagram and YouTube to spread COVID-19 misinformation. This resulted in the suspension of several of the new accounts.[14]

Benjamin defends his act as criticism of the American left and political correctness. In reality, he uses his platform to espouse bigoted, antisemetic, transphobic, and homophobic beliefs, all mixed up into a fetid brew of pseudoscience and conspiracy theories. Benjamin's so-called comedy act is best described as "the alt-right movement disguised as comedy."[15]

Benjamin believes that there is massive Jewish influence in pornography, Hollywood and media,[4] promotes antisemitic conspiracy theories,[5] has stated that director Stephen Spielberg was involved in pedophilia crimes,[2] and said that the transgender rights movement is part of a eugenics program to lower the world population.[3]

Further cementing his status as a raving loon, Benjamin believes that the moon landing was faked,[4][2] the earth is flat,[16] and dinosaurs are a "Smithsonian lie."[16] He also spreads coronavirus misinformation.[14]

Benjamin believes that the United States should close the borders and halt all immigration, because all immigrants are "weak."[4] His performances often include a song called "That Nigger Stole My Bike."[16][10][15]

Benjamin has shared the spotlight on streaming platforms with white supremacist Faith Goldy and Peter Brimelow, founder of the white nationalist webshite VDARE.[2][12] Benjamin believes that the Ku Klux Klan is less offensive than abortion, socialism and gun control.[2]

In 2020, Benjamin purchased ten acres in Boundary County, Idaho and immediately began implementing plans for a "The Great Bear Trail," a community "self sufficient and not depending on those with ideologies that are oppressive to mankind."[18] Of course, he never applied for any permits for the construction work happening there. His neighbors were less than pleased, and alarmed at the prospect of "[a]nother racist zealot with a “compound” nearby.[19] After numerous complaints, county officials issued a formal complaint detailing potential land use violations to Benjamin in June 2021.[20][21]