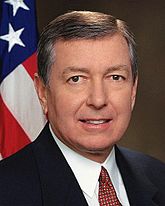 John Ashcroft (1942–) was the politician who famously lost his seat in the US Senate to a dead guy,[1] before being appointed Attorney General by George W. Bush. He also famously went after Martha Stewart.

He had a thing for calico cats. That would be an extreme paranoia of them, based on his belief that calico cats are Satan's minions.[2] 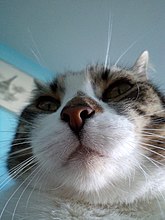 Calico cat is spying on you.

He was a Pentecostal Christian, ordering the covering of a statue's breasts and removing the word "Pride" from all Justice Department documents due to its status as a sin. Most notoriously, Ashcroft helped facilitate the extrajudicial reasonings conducted by the Bush administration over their police state measures during the War on Terror.[3] Sadly, it turned out that this insanely conservative and ultra-religious man was far too decent for the Bush administration. Apparently, Alberto Gonzales attempted to get him to sign off on warrantless wiretapping while drugged up after surgery (knowing he wouldn't sign off on it any other time). Still, he refused, saying he was in no condition to sign anything and forcing them to deal with his skeptical assistant.