Neo-Confederates with Neo-Nazis at Unite the Right

Neo-Confederate (otherwise known as Southern Nationalist) is a label for several fringe political groups that believe that the states that made up the Confederacy during the 1861 Slaver Rebellion (Virginia, North Carolina, South Carolina, Georgia, Florida, Alabama, Mississippi, Louisiana, Tennessee, Arkansas, and Texas - and in some cases Maryland, Missouri, Kentucky, and West Virginia despite their not actually being members of the Confederacy (and the last existing in the first place for the sole reason of not joining the Confederacy)) should once again secede from the Union and form their own nation-state. These people believe that Southern interests have diverged so far away from Northern interests that it merits splitting the United States of America into two countries.

The origin of the term is unclear, but it was used as early as 1949 by Arthur Schlesinger Jr. in his book The Vital Center to describe Strom Thurmond and the Dixiecrats, and in 1954 by Leonard Levy in a book review published in The Western Political Quarterly. The modern use of the term as a self-identifier dates from Southern Partisan magazine in 1988.

The modern neo-Confederate/Southern Nationalist movement got a boost with the publication of the 1991 book The South Was Right by James Ronald Kennedy and Walter Donald Kennedy. That book used the occasion of the breakup of the Soviet Union and Yugoslavia as an excuse to assert that the time had come for the Southern states to once again secede, arguing that the South was culturally and historically a separate people from the North. The South Was Right is also filled with "slaves didn't have it so bad" arguments alongside blaming Northerners for the slave trade, the use of Yankee, Scalawag, and Carpetbagger as insults on almost every page, and claims that Southern people are of primarily Celtic ancestry while Yankees are primarily Anglo. This is, at best, a gross twisting of history. In the early European settlement of North America, the Celtic peoples (Scots, Scots-Irish, and Welsh) settled in Pennsylvania and the Appalachian region — the latter of which was a stronghold of pro-Union sentiment during the Civil War, to the point where northwestern Virginia counter-seceded from Virginia and remained loyal. This is before you get into later migrations of Irish Catholics to the Northern industrial cities. Meanwhile, the coastal regions of Virginia and the Deep South, the core of secessionist and pro-slavery sentiment, were (and still are) primarily Anglo.[note 1]

The League of the South is one of the most visible neo-Confederate/Southern Nationalist organizations, founded in 1994. In 1999, members of the League of the South formed the Southern Party, a minor political party with a Southern nationalist/secessionist platform which ran candidates in the 2000 elections but disbanded in 2003 due to internal squabbling, although a few state chapters remain. Another example of a Neo-Confederate/Southern Nationalist organization is Occidental Dissent, an alt-right, white nationalist, and anti-Semitic news website run by Alabama native Brad Griffin (aka Hunter Wallace). Griffin/Wallace and other writers of Occidental Dissent regularly write articles that attack leftists, liberals, political correctness, Jews, blacks, Hispanics and non-whites in their articles. 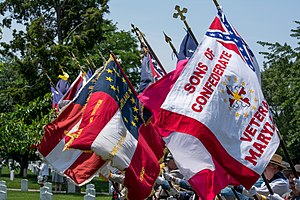 Neo-Confederates/Southern Nationalists believe and promote the Lost Cause of the South mythos. They tend to be racists and Dominionists, and there is some degree of overlap with Christian Identity. They believe that the South has a primarily Christian and European background (usually "Anglo-Celtic") and that it should take steps to preserve this. While their literature is silent about the issue of Jim Crow, and they claim that they do not want to reinstate slavery, it is a pretty safe bet that being a black person in a new Confederacy would not be a comfortable life. These people vociferously deny that the Confederacy was founded to protect slavery, instead maintaining that the secession was due to some nebulous idea of "states' rights" and protecting against the rise of centralized tyranny in the North. A recent new belief of the Neo-Confederate movement is called "Alt-South" by Occident Dissent writer Brad Griffin/Hunter Wallace. Alt-South (as its name suggests) mixes the ideas of Neo-Confederates with the alt-right (in other words, likely combines the worst ideas of both).

Teaming up with other cranks[edit]

Despite (or perhaps because of) their antipathy for Yankees, many Neo-Confederates/Southern Nationalists vocally and, on their websites, blogs, and message boards, vociferously support the small group spawned by the Mississippi-born creator of the Second Vermont Republic (SVR), Thomas H. Naylor. During an hour-long interview on his Holocaust-denying, neo-Confederate Internet radio program The Political Cesspool for Confederate History Month, James Edwards, League of the South leader and author of Racism Schmasism, said that Naylor was "obviously a good Confederate".[1] Naylor and SVR are topics of frequent discussion on Stormfront, the message board of ex-Klansman Don Black.[2] Kirkpatrick Sale,[note 2] a co-founder of SVR and current delegate to the neo-Confederate Southern National Congress, delusionally spoke of his friend Naylor's "successful" efforts and his frequently proposed plan for a confederation of states from a secessionist New England and the Maritime Provinces of Canada.[3]

In 2007, shortly after the Vermont Secession blog revealed the SVR's ties to numerous neo-Confederates/Southern Nationalists[4] like Thomas DiLorenzo and LOS board of director member Franklin Sanders (who served on the SVR advisory board), controversy broke in the Vermont blogosphere over the disclosure concerning one board member, Donald Livingston, who headed up the neo-Confederate Abbeville Insitute, so named for the plantation of the mid-19th century slavery advocate James C. Calhoun, and where Naylor serves as an "associate scholar".[5] Livingston had been the first director of the League of the South's Institute for the Study of Southern Culture and History, as well an adjunct faculty member at the libertarian Ludwig von Mises Institute in Alabama.[6] Champlain College professor Rob Williams, then co-chair of SVR and managing editor of the now defunct companion journal of SVR, Vermont Commons, responded to questions about racists from the League of the South and specifically about VTCommons contributor Livingston by saying,