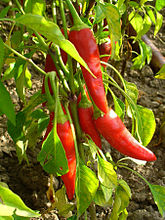 Chilies growing in a garden

Cayenne pepper or Chili pepper (Capsicum annuum) is a spice. It and related species (esp. C. chinense) contain capsaicin, which is the primary source of "hotness" in most hot sauces. The purified capsaicin extract is an ingredient in some topical remedies for joint and muscle pain, and is also the main ingredient in many pepper sprays. The bell pepper is a different cultivar of the same species as cayenne; it does not produce capsaicin. Many spices contain antioxidants, and capsaicin is no exception.[1] A 1999 study of culinary spice use found that traditional spice use was correlated with geographic latitudes and elevations, indicating that spice use likely developed as a way to counteract microbial contamination of foods (i.e., higher ambient temperatures increases microbial activity, which increases the need for more microbial control in the form of spices).[2] Another proposed explanation (not exclusive of the first) is that spicy foods encourage perspiration, helping keep the human body cooler in hot weather.

Apparently Cayenne is now recommended as an herbal treatment for heart attacks on the just-vague-enough-to-sound-believable premise that it "promotes warm blood circulation".[3] Suffice it to say, this mechanism is poorly established at best, and in sensitive individuals, exposure to capsaicin has been known to cause heart attacks.[4] (Capsaicin is an irritant, after all.) And while some small positive metabolic changes have been seen in rat models,[5] human use of cayenne pepper for metabolic regulation can have nasty side effects.[6][7]

Cayenne is the capital city of French Guiana. Hot peppers are known there, but the local cuisine, although spicy, is not notably sphincter-burning.