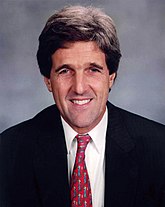 John "Heinz" Kerry is a politician in the United States of America, although he has since become more notable for his diplomatic work. He is the former Secretary of State under the Obama Administration.[1] From 1985 to 2013, he represented Massachusetts in the US Senate (from which he resigned to become Secretary of State)[2] and almost won an election to the presidency in 2004, against an incumbent during wartime.[3] Which, as a C student in college, is a position he is eminently qualified for.[4] He is currently the United States Special Presidential Envoy for Climate, an office created by President Joe Biden.[5]

He is also ridiculously French.

In September 2007 an incident at the University of Florida caused a stir in the media and the Internet in which a student was forcibly removed and tasered at an event where Kerry was speaking.

Kerry famously piloted a boat up the Mekong River in The 'Nam to locate one rogue colonel named Kurtz while jamming to "I Can't Get No Satisfaction" and dodging tigers and Playboy bunnies and the like while the whole crew was tripping on something. A movie was eventually made about this with the names changed to protect the guilty. He was also in Skull and Bones at Yale, which makes him very eminently qualified to be president, at least in the view of our secret rulers.

He was an early supporter of Barack Obama, and many thought he would become the American Secretary of State. He did eventually replace Hillary Clinton in this role for Obama's second term, but during Obama's first term, he instead served as chairman of the Senate Foreign Relations Committee. In this role, he did do some diplomacy for the United States, such as when he convinced Hamid Karzai to hold a runoff election after accusations of fraud in the Afghan election.

His record as Secretary of State was surprisingly consequential. In 2013, Kerry accidentally suggested that Bashar al-Assad could turn over his chemical weapons to ward off a military strike from the United States; Russia jumped at the advice and convinced Assad to do exactly that with Kerry stewarding the deal. He helped spearhead the Iran Deal, which reduced Tehran's nuclear program and prevents them from building nuclear weapons in exchange for a loosening of sanctions on their economy. He presided over the Cuban Thaw, which allowed America and Cuba to begin official diplomatic negotiations for the first time in over 50 years. More recently, he pushed for the successful signing of the 2016 Paris Agreement, which set international standards for combating climate change. He also successfully negotiated a ceasefire with Russia over Syria.

This politics-related article is a stub.
You can help RationalWiki by expanding it.
Retrieved from "https://rationalwiki.org/w/index.php?title=John_Kerry&oldid=2397375"
Categories:
Hidden categories: