Elizabeth Warren is a Senator from Massachusetts, and a legal scholar who worked at Harvard University. As an expert on bankruptcy laws, she has testified before Congress and authored a number of books on financial matters that affect middle-class Americans.[1]

She won the 2012 election against Republican incumbent Scott Brown, becoming the first woman to represent Massachusetts in the Senate.[1]

Warren was a Republican until 1996 when, at the age of 47, she registered as a Democrat after she was hired to be Harvard's first white female professor of color. [2] She stated she switched parties because she no longer believed Republicans supported markets.[3] Her colleagues stated she previously had held "surprisingly anti-consumer views" and was a "die-hard conservative."

Warren has worked across the aisle with Republicans on legislation pertaining to marijuana, National Guards' pay and predatory lending.[4]

Elizabeth Warren considers America's $1.5 trillion student debt a "crisis". She and Senator Bernie Sanders want to introduce legislation to subsidize or eliminate tuition from public institutions of higher learning. She also plans to cancel some debts for 95% of people with student loans and all debts for 75% of borrowers. More specifically, the federal government would erase up to $50,000 in student loan debt for every borrower with a household income of less than $100,000 and would forgive a portion of the debt owed by those who earn between $100,000 and $150,000. Bernie Sanders goes a step further than her on this issue, promising to erase 100% of student debt for 100% of people. Elizabeth Warren also wants to provide financial aid to students to cover non-tuition expenses. Canceled debt would not be taxable as income. Her plan is estimated to cost $1.25 trillion over ten years.[5]

Warren argued for abolishing the Electoral College, which she believed has been disenfranchising voters. She said she wanted a constitutional amendment that makes sure every vote gets counted.[6] 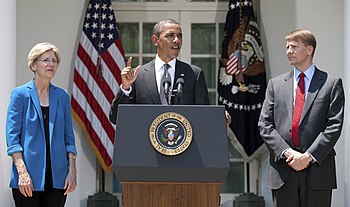 With President Obama during his nomination of Richard Cordray as first director of the Consumer Financial Protection Bureau.

Using the Dodd-Frank Wall Street Reform and Consumer Protection Act, she helped create the Consumer Financial Protection Bureau, of which she served as interim director.[1] The Bureau has returned more than $12 billion to those who fell victim to predatory financial practices.[7] But when President Barack Obama tried to appoint her to lead the Bureau, her appointment was blocked by the Republican-controlled Senate.[1] However, a 2017 law means that American consumers have effectively lost the ability to sue companies following its passage, as it grants immunity from class-action lawsuits to financial institutions.[8]

Warren is a vocal opponent of the Trans-Pacific Partnership (TPP). She argued that it will benefit wealthy corporations at the expense of American workers and the environment. She criticized President Barack Obama for the secrecy of the negotiation process and for the fact that voters are not allowed to see what actually is in the deal. The Obama administration reasoned that the TPP would stimulate economic growth and establish labor standards for all the signatories.[9]

She has proposed a wealth tax on the wealthiest 75,000 families in the United States. In particular, she wants a 2% wealth tax on households whose net worth is over $50,000,000 each, and a 3% wealth tax on those worth over $1 billion each. The two economists advising this proposal estimated that it would raise approximately $2.75 trillion over ten years.[7]

In March 2019, Warren offered a plan to re-categorize tech giants, such as Google, Amazon, and Facebook, and to break them up into smaller firms. Warren believes it is the job of the government to bust monopolies and to promote competitive markets. In her plan, businesses worth $25 billion or more in global revenue that "offer to the public an online marketplace, an exchange, or a platform for connecting third parties" will not be allowed to own said platforms. They would be required to "meet a standard of fair, reasonable, and nondiscriminatory dealing with users." Sharing user data with other companies would be banned. Her proposal came at the same time as Democrats in Congress were introducing legislation to better ensure net neutrality, i.e. to prevent service providers from manipulating the way their users experience the Internet.[10]

In February 2019, Elizabeth Warren proposed the Universal Child Care and Early Learning Act. Partly based on the existing Head Start program, it would provide government-funded childcare centers. Families whose income is less than 200% of the federal poverty level may send their children to these centers for free. Those who make more money will be charged according to a sliding scale with a maximum rate of 7%. Two economists at Moody's Analytics estimated that Warren's proposal would cost the federal government $70 billion more than it currently spends on childcare, but will be fully funded by her wealth tax. In their calculation, they assumed that the program would give families more disposable income and more time to work and would provide well-paying jobs for childcare workers. They argued that the benefits from this program would outweigh the drawbacks of a tax hike on wealthy people. They also pointed out it has important implications for female labor force participation; many women are forced to stay at home simply because they cannot afford childcare.[11]

In September 2017, she voiced her support for the single-payer universal healthcare proposal of Bernie Sanders, known as Medicare for All. Warren argued that Medicare for All is the next step whose healthcare reform whose time has come.[12]

Warren favors "net metering," which would allow household-owned green energy generators, such as solar panels, to be connected to the power grid.[7] Therefore, consumers would be able to use the power they generate at any time, rather than just at the time when it is generated.

Many progressives hoped that Hillary Clinton would choose Warren as part of her unity ticket in order to bring the grassroots into her campaign; instead, she underestimated the loyalty of old, white social conservatives to the Republican Party and so went with one of those guys instead ("balanced ticket" and all that).[13]

Senator Warren answered in the affirmative when asked if the 2016 Democratic primary was rigged.[14] She later amended her opinion on the matter "suggesting instead that the Democratic National Committee (DNC) showed some bias but that the selection process had been fair."[15] 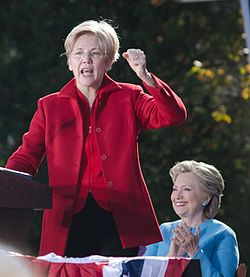 Campaigning for Clinton in 2016.

Warren repeatedly and falsely claimed to have Cherokee and Delaware heritage (that is, cultural identity) on the basis of family lore. During her career at Harvard, the university often boasted of its diverse faculty including mentioning Warren among its list of minority professors with actual people of color. Prior to her career at Harvard, Warren provided information that suggested she was a minority for the Association of American Law Schools directory of professors of law.[16] This claim spilled over into her run for the United States Senate in 2012. Warren's high cheekbones, along with the same feature present on her Full House-white grandfather, was proffered as evidence by Warren herself, demonstrating the embarrassing ignorance of a high profile politician basing her knowledge off of stereotypes rather than actual facts. Despite what alt-right human biodiversity web forums would have you believe, high cheekbones aren't all that special.[17]

Naturally, this provided ample political cannon-fodder to the GOP. During the 2016 campaign season, when he was running for president, Trump frequently slammed Warren as a high-profile Clinton donor. He called her "Pocahontas" – an ethnic slur that particularly showcased his ignorance, since Pocahontas wasn't Cherokee. Due to a fear that Warren may emerge as the new face of the Democratic Party, Trump upped the ante against Warren.[18] Just in case anyone got the wrong idea about his motives behind the stereotype, in his CPAC speech he doubled down, saying he "should have saved the Pocahontas thing" for a time when he'd be running against her.[19]

On October 15, 2018,[20] Warren released a DNA test done by Carlos D. Bustamante, a professor of Biomedical Data Science and Genetics at Stanford University.[21] According to Bustamante,[22] the test results "strongly support the existence of an unadmixed Native American ancestor in the individual's pedigree, likely in the range of 6-10 generations ago", so that Warren is at least 1/1024th to 1/64th Native American. But the test does not confirm that her genetics link her specifically to the Cherokee, because Native American tribes do not provide genetic information, forcing geneticists to use South American natives as a proxy[23] [24], and cannot determine the degree of admixture in other ancestors should they exist because of the stochastic nature of genetic inheritance and limitations of genetic tests[25]. What can be determined is that, while, contrary to Trump’s claims, she does have “Indian [sic] blood”, she does not have nearly enough to support her claims of Cherokee identity. Cultural appropriation is wrong, and using it to promote yourself is a deplorable act for which she deserves condemnation.

The Cherokee Nation condemned Warren, stating "A DNA test is useless to determine tribal citizenship. Current DNA tests do not even distinguish whether a person’s ancestors were indigenous to North or South America."[26] Cherokee Nation Secretary of State Chuck Hoskin Jr. stated "using a DNA test to lay claim to any connection to the Cherokee Nation or any tribal nation, even vaguely, is inappropriate and wrong."[27]

Warren apologized for the incident.[28]

On December 31, 2018, Warren announced an exploratory committee for President.[29] Her strategy is to focus on the specifics of policies rather than platitudes and rhetoric lacking in substance.[7] She officially announced her bid on February 9, 2019, in Lawrence, Massachusetts, a former industrial mill town in order to appeal to immigrants, low-wage workers, and union members. One of her backers include Massachusetts Representative Joseph P. Kennedy III, her former student.[30] Like other Democratic candidates, she has largely been avoiding getting into feuds with Donald Trump. Warren remarked that Trump "may not even be a free person" by the time of the 2020 election, pointing to the then ongoing Mueller investigation.[31]

Despite a slow start, Warren steadily rose in the polls because she had a plan for almost everything, which really says something about the state of American politics if the appeal of candidates is based on whether or not they have actual plans. However, she peaked long before the primaries (her best showings came around September and October, when she was beating Bernie Sanders at his own game and polling ahead of the front runner Joe Biden), and by November her campaign was in a advanced state of decline that her supporters blamed on sexism (Bernie-Bros and all that), her moderate detractors blamed on her being "too far left" like Labour in 2019 (is Corbyn-baiting a thing?), and her leftist detractors blamed on her being a fake progressive too willing to compromise with the establishment. By January, a month before the primaries, she had lost all momentum and was polling in a distant third place nationally, allowing Sanders to retake his position as Pontifex Maximus of the American left, and only leaving Warren in the lead in her home state of Massachusetts after she lost support to him in the early states. Her support in Massachusetts then subsequently collapsed on Super Tuesday too, leaving her at third place behind not just Bernie, but Biden too. After the losses experienced on Super Tuesday, and criticism that she was splitting the progressive vote when moderates had already consolidated around one candidate,[32] Elizabeth Warren chose not to persist any longer, and finally dropped out of the race.[33]

In late April 2019, Warren became the first 2020 presidential candidate to call for impeachment proceedings against incumbent President Donald Trump to begin, following the release of the Report on the Investigation into Russian Interference in the 2016 Presidential Election by Special Counsel Robert Mueller. By comparison, other candidates were more cautious. They either believe that impeachment is an option or that the best way forward is to defeat him at the ballot box.[34]