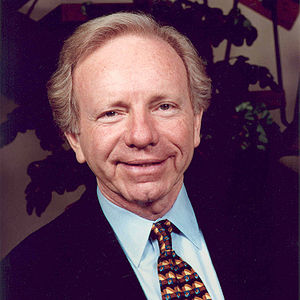 Joe Lieberman (1942–) is the former Democratic Senator from Connecticut. He's both a former Senator and a former Democrat. He was for a long time George W. Bush's go-to guy for a Democrat who would support him on the war; when this cost him the Democratic nomination in 2006, he ran as an independent and won anyway.

The funny thing is that it was his willingness to run as an independent that cost him the nomination in 2006. With the support of Connecticut's Republicans, he barely won re-election to his seat. (By barely, we mean by slightly under 10 points).

In 1988 he first won his seat running against liberal Republican Lowell Weicker by running to the right and seeking and getting the endorsement of, among others, the Moral Majority. He was the only Democrat in the Senate, except for Robert Byrd, to publicly rebuke Bill Clinton, and he privately led a crusade to get professional wrestling off of TV. He was also involved in the 1993 congressional hearings on video games,[1][2] where he "blamed video games for violence".[3] Thankfully, Joe has since moved on from blaming video games for violence; now he blames the Internet.[3] His reputation as a righteous tightass solidified, he was chosen as Al Gore's running mate in 2000 (although the "blame Nader" crowd would prefer you not mention this inconvenient truth). His most frequently used phrase during the debates with Dick Cheney was "I agree with my opponent on that."

Following his McCain endorsement, Harry Reid planned to punish Lieberman by stripping him of his seniority within the Democratic caucus and his committee assignments (including his chairmanship of the Senate Homeland Security Committee) , but Barack Obama (the man he campaigned against, mind you), talked Reid out of it, as he was apparently more interested in getting Joe to vote with the Democratic Party than in punishing him. It worked for a little bit, he was a reliable Democratic vote except on the Democrats' major issue, health care reform with a public option. On that issue he threatened a filibuster, and thus was single-handily responsible for the Public Option being removed from the final healthcare reform bill. The fact that Connecticut contains the headquarters of most of the insurance industry could possibly be mere coincidence.

Perhaps his only progressive achievement was opposing his good mate McCain in legislating for the repeal of the homophobic "Don't ask, don't tell" policy to allow gay and lesbian people to serve openly in the US military.[4]

Lieberman announced that he would not seek re-election and retired from the Senate, effective 2013. He was replaced by Democrat Chris Murphy.

He endorsed Hillary Clinton in 2016, which went really well.[5] He was reportedly (and bizarrely) considered by Donald Trump as a potential FBI head in 2017, despite being far too old and a politician, but nope, the job went to Christopher A. Wray, who at least had experience as Assistant Attorney General.[6] His main work recently has been with United Against Nuclear Iran, which lobbies against the Obama-era nuclear deal with Iran (the Joint Comprehensive Plan of Action

).[7] With the collapse of the deal, Iran is currently enriching lots of uranium and heading towards a nuclear bomb.[8]