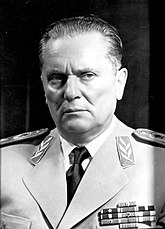 Josep Broz Tito was a Yugoslav communist revolutionary and ruler of Yugoslavia from the end of World War II until his death in 1980. Lauded by the West for his independence from Soviet influence (he broke with Stalin in 1949),[2][3] he managed to keep his multi-ethnic state stable (both economically and politically) but by repressive means,[4] earning the title of a benevolent dictator.[5][6][7] This means that his reputation, enhanced during the terrible wars of the 1990s, is based partly on a willingness to look away from his faults. Yugoslavia under Tito had few freedoms and many friends, but his failure to solve the country's ethnic tensions must be looked on as his greatest fault. He did, however, manage to create an organization evil pinko commie fascist imperialist system called the "Non-aligned movement," which consisted of countries mainly in the developing world that claimed independence from both the United States and the Soviet Union in the Cold War.

Early on in the WWII, Tito was actually a hard-line Marxist-Leninist, and when he led the partisans, a guerrilla resistance movement against Axis occupation of Yugoslavia, he required them to take indoctrination classes in Stalinist ideology. With the Cold War in full swing when he broke from Stalin, the west trotted Tito out as a "reformed" and "moderate" leader they could court and work with. The initial cause of the split was Tito's taking a more hard-line position than Stalin in the immediate aftermath of World War II, specifically, Tito supporting the Communists in the civil war in Greece while Stalin failed to do so out of deference to his then-ally Winston Churchill and Tito's desire to seize Trieste and incorporate it into Yugoslavia, also opposed by Stalin.

The USSR did not, or perhaps could not, invade Yugoslavia to bring it back into the Soviet orbit as they later did with immediately neighboring Hungary (1956), Czechoslovakia (1968), and Afghanistan (1979) when they also tried to steer an independent course from Moscow; geographic distance is probably the reason, as with the similarly successful break of Albania under Enver Hoxha from the Soviet orbit. Tito's Yugoslavia and Hoxha's Albania, however, were very different cases, with Hoxha taking an exceptionally-hard Stalinist line and Tito trying to steer a course of being more moderate than the USSR, so they were not exactly allied with each other in any sense. Indeed, Hoxha denounced Tito louder than nearly anyone else as a "revisionist." After the break from the USSR, Yugoslavia under Tito largely abandoned the Soviet-style planned economy in favor of a "market socialist" economy of workers' self-management similar to syndicalism, although Yugoslavia remained a one-party Communist state. By all accounts, it went much better and remained stable until the fall of Yugoslavia. Yugoslavia also avoided most of the cultural repression found in other states of the region, with Yugoslavs enjoying western music, films, and many Western consumer goods. Yugoslavian also had its own vibrant and varied art scene, with wide varieties of film, music, and other arts being allowed (and even encouraged) by the state. Yugoslavia's was, at one time, considered the strongest passport in the world, and many Yugoslavs could and did travel more or less freely through both the Warsaw Pact and NATO. Yugoslavs were allowed to seek education and find work abroad, and many did. For these reasons, Tito maintains some popularity in multiple ex-Yugoslav nations.[8][9] However, some criticize Tito's policies and claim that Yugoslav workers lost their sense of class consciousness due to his party's suppression of strikes.[10] Yugoslav communists are also criticized for taking out an IMF loan which destroyed the economy.[11][12]

Tito, however, failed to solve the country's long-standing ethnic feuds. One major mistake made by Tito was his attempt to cover up elements of the Genocide of Serbs in the "Independent" State of Croatia. His government papered over WWII atrocities in order to create a shared "Yugoslav" identity.[13] After his death in 1980, Yugoslavia began to destabilize, breaking apart completely in 1991-1992 with several of the resulting countries undergoing civil wars along ethnic and religious lines.