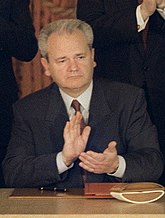 Slobodan Milošević (1941–2006), nicknamed "The Butcher of the Balkans", was the authoritarian nationalist President of Serbia from 1989 to 1997 (one of several republics of Socialist Federal Republic of Yugoslavia, and he then led the rump state of Federal Republic of Yugoslavia (Serbia and Montenegro) from 1997 until his overthrow in 2000. During his time in power Milošević was involved in a litany of crimes against humanity during the Yugoslav Wars including acts of genocide against Bosniaks committed by the Republika Srpska and ethnic cleansing against Albanians in Kosovo. These war crimes were inspired by Milošević's nationalist agenda, in which he abandoned the idea of a united Yugoslavia and instead sought to create a Serbian ethnostate by annexing the Serbian parts of Croatia and Bosnia, and then getting rid of the non-Serbs.[2]

He was also the very first sitting head of state to be charged with war crimes.[3] What an honor!

He was an obscure functionary in communist Yugoslavia until the 8th Plenary Session of the Central Committee, where he advocated for a hardline policy in regards to supporting Serbs living in Albanian-dominated Kosovo. By claiming that the provincial government in Kosovo was abusing its powers, he wanted to end their autonomy. What made him so remarkable is that most Yugoslav politicians steadfastly denounced nationalism, while he was very obviously in favor of it (well, for Serbs anyway) despite publicly claiming otherwise. These positions were popular with the Serbian public, and he soon used a hyper-nationalistic mass movement of his supporters to get rid of many intra-party rivals during the so-called "Anti-bureaucratic revolution."

He could not resist using this power to amend the constitution, usually in ways that gave Serbia more power over the other seven republics which made up Yugoslavia. Counting Serbia, he controlled four republics — Montenegro and Vojvodina were claimed in the revolution, and Kosovo was handed to him when many Albanians began to boycott elections. These policies naturally accelerated the breakup of Yugoslavia, which he was determined to keep together as a "Greater Serbia." The result was one of the most horrifying European conflicts after WWII.

His internal politics were described as authoritarian and his party and satellites controlled mass media during his rule. He was accused of electoral fraud, censorship, and even killing and beating his political opponents, most notably Vuk Drašković (who survived assassination) and Ivan Stambolić. He kept masses of people under his control because of his mixture of ultranationalism, socialism and media spinning.

During the war, Milošević's government sponsored brutal Serb militias that massacred civilians in Bosnia and Croatia. The worst of them was the Republika Srpska, a breakaway region in Bosnia led by Radovan Karadžić that murdered over 100,000 people while attempting to rid itself of ethnic minorities.[4] Milošević was also personally in charge of the massive crackdown in Kosovo that killed more than 8,000 Albanian Muslims and forced two million from their homes.[5]

NATO sanctions against Milošević made him much less popular, and when he tried to rig the 2000 general election a hefty amount of the Serbian populace decided this was the last straw. He was overthrown on October 5, 2000 when millions of Serbs went on the streets demanding his resignation. Milošević died of natural causes before his war crimes trial could be finished, but he was defiant and unrepentant during the proceedings.[6]

Communists and conservatives both admire him as a hero in a particularly extreme example of Horseshoe theory. His right-wing fan club is an outgrowth of his Serbian ultra-nationalism.[citation needed]