Where it used to be.

Czechoslovakia was one of the new states in Europe recognized by the treaties (Versailles, Trianon, and Saint-Germain-en-Laye) ending World War I- the peace agreements that set the stage for a slaughter twice as bloody as the war they officially ended. A liberal democratic regime from 1918-1939, and a genuinely consolidated liberal democracy at that, Czechoslovakia was partitioned from 1939 to 1945 after a German occupation and then reassembled by Joseph Stalin to serve as a Soviet client state during the Cold War (1948-1989). After the fall of the Berlin Wall in 1989, Czechoslovakia became democratic again. A few years later the Czech and Slovak people voted democratically to split into two separate states, today's Czech Republic and Slovakia.

World War I ended. The Austro-Hungarian Empire fragmented into Czechoslovakia, Austria, Hungary and Yugoslavia. Franz Kafka was among the new state's citizens. Czechoslovakia became an island of democracy surrounded by fascists (a bit like Austin, then).

, which covered many of today's Slovakia territory, but only lasted for three weeks.

In 1938 Czechoslovakia, the last democratic state in central Europe, was invaded by Nazi Germany with the blessing of the British and French governments. Neville Chamberlain dismissed the occupation as "a quarrel in a far-away country between people of whom we know nothing." To add insult to injury Hungary and Poland also carved out sections of Czechoslovakia for themselves.

Slovakia declared independence as a result and became a nominally independent state in Central Europe under Nazi German control of foreign policy and, increasingly, also some aspects of domestic policy. Jozef Tiso, a Catholic priest, became Prime Minister and later President of the new state with a fascist and clerical-nationalist one-party government.

After 1945 liberation (yay!) Czechoslovakia was taken over by Communists at Stalin's behest (boo!), Jan Masaryk, the Minister of Foreign affairs and last non-communist minister, died under suspicious circumstances. 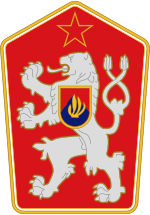 In 1968, party boss Alexander Dubček decided to try out "socialism with a human face" - that is, treating people like human beings. For this noble effort the Soviet Union sent in the tanks, the government was replaced with hardliners and Dubček was dismissed from power.

The plastic people of the Universe, a subversive rock/jazz band doing Frank Zappa numbers under the guise of lectures about American Decadent Capitalism, were imprisoned for playing music without a license. A group of dissidents called Charter 77 (including Vaclav Havel) protested. They, too, were imprisoned, but since they were all playwrights and journalists, they managed to get the message out about what was happening in the country.

The Velvet Revolution: eventually, 12 years later the dissidents head a mass pro-democracy movement (called Civic Forum, the blandest title of a revolutionary movement ever) which kicked out the Communists and restored democracy, with Havel as one of the coolest presidents of anywhere ever. Thus, the Plastic people of the Universe become only rock band in the world who ever changed history.

Alexander Dubček was killed in a (possibly suspicious) car crash, and Czechoslovakia broke up.