From RationalWiki
Jump to: navigation, search
Not to be confused with the literature historian Jovan Deretić 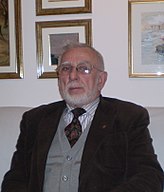 Jovan I. Deretić (1939–2021) was a megalomaniac pseudohistorian and conspiracy theorist from Serbia who believed that all Indo-Europeans (except Albanians) are Serbs and that this "fact" was hidden in the name of the Vatican after the Berlin Congress in 1878. Thanks to his tireless efforts in promoting his ideas, Deretić became synonymous with neo-romanticists

(a derogatory term for people who wish that history is perfectly suited to their needs and who used medieval poems and legends as serious historical sources, in contrast to historians of the "critical school", who take a more serious approach).

Jovan I. Deretić & Co. emerged and benefited from the chaos that hit the Balkans during the 1990s. The collapse of communism and breakup of the former Yugoslavia during the 1990s set the stage for nationalist agitators in successor states. Due to negative experiences with Catholic Church in past (especially during World War II), some Serbs are prone to accept more or less crackpot conspiracy theories that include Vatican and the Pope.

According to Deretić, while he was still a teenager, people in his native Herzegovina used to find pieces of pottery. His uncle explained to him that the pottery dated back to before the Roman era. Stunned little Jovan asked "But how it is possible, if we (Serbs) migrated here in 7th century?" His uncle replied "Dear boy, don't be a fool, nobody migrated here."[1]

Deretić's education is somewhat unclear. He claimed that he studied at the Belgrade Faculty of Sciences, then left Yugoslavia in 1963 and went to France. There he first attended the Paris Technical School, and then studied history in Lyon for three years, not enough  to obtain a Ph.D. He moved to the United States, and claimed to have obtained an LLD in Chicago. Finally, he claimed to be a member of the Petrovskaya Academy of Science in Saint Petersburg, Russia (note that this academy was established in 1991. Russia's national academy is the Russian Academy of Sciences; Petrovskaya is more like NGO). Knowing that Deretić dares to claim that even Russians are under Vatican influence (see below), it is unclear how he obtained membership in the "academy".

Deretić built his pseudohistory upon the work of Miloš Milojević and Sima Lazić Lukin, whose theses were discarded and debunked by historians such as Ilarion Ruvarac in the 19th century. While Milojević and Lazić held somewhat modest views on Serbian history, Deretić believed that there was an ancient Serbian empire that ruled the world (or at least had great impact on early history). He explained that modern accepted history is the product of a Vatican-Austrian conspiracy to force Serbs to abandon the process of national liberation and unification, making it easier for Catholicism and Austria to spread further to East

Deretić is accepted only among uneducated laymen. No one sufficiently intelligent in Serbia ever endorsed Deretić. Radivoje Radić

, an associate of the SANU Byzantine Institute, wrote book Srbi pre Adama i posle njega, istorija jedne zloupotrebe: Slovo protiv novoromantičara (Serbs before Adam and after him, history of an abuse: A word against neo-romanticists), debunking Deretić's claims.

Deretić took part in political life in Serbia, but without any success. In 2011, he founded NGO Free Serbia. Some ideologies espoused by the movement include euroscepticism, counter-globalisation, social conservatism, and aligning Serbia with a proposed Eurasian Union.

In the election in Serbia in 2014, Deretić was in party Free Serbia...They won only 0.2 per-cent of the votes out  an electorate of some seven million, meaning only a couple of thousand Serbians believed his ideas. As it seems that there were in fact three million or less actual votes cast, the actual supporters number far less.