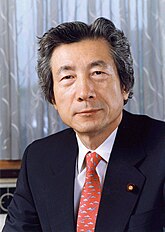 Junichiro Koizumi (小泉 純一郎) (1942–) is Japan's former prime minister (26 April 2001 – 26 September 2006), a right-wing populist[1] and a Japanese nationalist. He is considered to have been the politician who has turned elitist Japanese politics into populist and nationalist tendencies.

Economically, he was a politician with a very strong neo-liberal inclination within the Liberal Democratic Party.

Diplomatically, Koizumi maintained a very pro-U.S. and neoconservative line similar to Tony Blair. He actively supported George Bush's War on Terror. He was also active in sending the Self-Defense Forces to Iraq and other foreign countries.

Koizumi is regarded as a politician who fundamentally changed the LDP. The LDP was actually a very elitist party, but its right-wing populist nature grew after Koizumi.

He turned the party's inclination toward nationalistic populism, which in turn resulted in a far-right nationalist politician Shinzō Abe and Yoshihide Suga becoming prime minister, who created the current political situation in Japan that dominated the LDP.

This article is a stub.
You can help RationalWiki by expanding it.
Retrieved from "https://rationalwiki.org/w/index.php?title=Junichiro_Koizumi&oldid=2276404"
Categories:
Hidden category: