"Reason" redirects here. For the concept of reason generally see rationality — which Reason mostly strays away from. 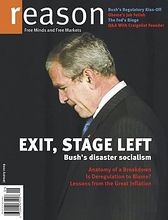 Reason is a libertarian magazine published by the Reason Foundation and formerly edited by Nick "The Jacket" Gillespie, who stepped down and let Matt Welch take over in 2008. Gillespie is now the Editor-in-Chief of Reason.com and Reason TV.

Reason tends to do pretty good work on civil liberties, particularly in its coverage of drug raids. However, they're still bankrolled by the usual suspects, including the Kochtopus and Scaife Foundations, who appreciate the fact that Reason's answers to most problems are "deregulate it" or "privatize it."

Readers of Reason refer to themselves as "Reasonoids," which is reminiscent enough of Randroid to be unintentionally funny.

Ten degrees to the right...[edit]

We have always been at war with Eurasia[edit]

Reason has a long history, starting in 1968 as a mimeographed newsletter, predating the Kochtopus by several years and was not part of the stable of groups set up by Koch in the late 1970s (though it has received Koch funding since). Regardless, the signal-to-corporate astroturf ratio is much stronger than even libertarian think tanks.

Throughout the 70s and 80s, Reason hosted Holocaust deniers,[1] "Reconstructionists" like Gary North,[2] and supporters of apartheid South Africa,[3][4][5] attacking anti-apartheid protesters and sanctions right up to Mandela’s release (when they finally dropped it).[note 1] They tried to downplay the fringe-right racism and sexism in recent years, with some success. When reminded of that chapter in Reason's history, Nick dismisses it all as "mud-slinging", of course.[6] More recently they have embraced unscientific positions on COVID-19 pandemic[7] and alt-right-friendly interpretations of astroturfed protests against pandemic measures.[8]

When it comes to environmental issues, they eschew outright denialism and criticize Republican inaction on climate change,[9] instead taking a position of minimization and support for (obviously) free market solutions to environmental problems (their favorite consultant on these issues tends to be Bjørn Lomborg, although they have run articles by noted denialist Patrick Michaels[10]). Their brand of libertarianism is much closer to McArdle (minus the armchair general stance) than von Mises.

On science matters, their science editor Ronald Bailey has done some good work opposing intelligent design and creationism[11][12] (though rather less so on Climategate.)

The magazine was consistently hostile to Donald Trump in 2016, warning that his presidential campaign was about "white identity politics".[13]

See the main article on this topic: Vulgar libertarianism

The magazine was more hard-core libertarian in its early years, but by the 1980s and 1990s, under the editorial leadership of Virginia Postrel, it had swung to the right and some accused it of embracing neoconservatism and of turning its back on libertarianism.[14][15] The magazine's endorsement of the first Gulf War (1990-1991) was particularly unpopular with its traditional readership. After 9/11 (2001), Reason underwent a fairly rapid swing back to the left in opposition to Bush's warmongering and clampdown on civil liberties. The Mises Institute, however, has never quite forgiven it for its dalliance with neoconservatism long ago, (never mind that the LvMI was palling around with the paleoconservative movement at the same time), so Reason is frequently a topic of disdain on Lew Rockwell's site.

After the election (2008) of Barack Obama as President, Reason's editorial platform returned to its pre-9/11 right-wing perspective, though libertarians insist that they are neither Republicans nor Democrats — eschewing political affiliations and deriding the two-party system as mere "teams" playing games. This disdain for the two-party system does not, however, preclude the editorial support at Reason of certain wingnut Republican politicians (chiefly Ron Paul, Rand Paul and a few Tea Party up-and-comers) who pay lip service to some libertarian principles while violating others.

You would think Reason would be all over Trump for a variety of reasons, Jeff Sessions' long history of going after pot for one.[16] (Well, they have been all over both Trump[17] and Sessions.[18]) It begs the question of how Reason feels about Bill Clinton's perjury. (You get one guess.)[19] Not only do they stand on the wrong side of history, they drop it as soon as it becomes expedient.

If you lie down with dogs[edit]

On some rare occasions the site has been known, despite claiming disdain for the two-party system, to have articles encouraging people to support the Democratic Party. These rare moments usually elicit very loud groans from the site's primarily right-libertarian readers in the comments section.[20]

Speaking of which, the comments section on Reason's "Hit 'n Run" rivals Yahoo! News for being the worst hive of scum and villiany on the Internet, and provides plenty of evidence to conclude that Web 2.0 with its "anyone can comment on anything" model perhaps isn't such a good idea.