Mecca is a city in Saudi Arabia and is considered the most holy site in Islam. When praying each day, a Muslim will try to pray in the direction of Mecca (Qibla

). Most religious architecture in Islam has some way of indicating where Mecca or more precisely the Kaaba is. In a similar vein, many churches and synagogues indicate the direction of Jerusalem, which - given architectural and geographic constraints[note 1] in bygone times - often means that the congregation is roughly facing east if said building was built in North America, Southern Europe, or Northern Africa.

Every Muslim is expected to make at least one pilgrimage, or Hajj, to Mecca in their lifetime, unless constrained by poverty or health. Deep in the heart of Mecca is a huge black cloth-covered marble box, called the Kaaba, around which each pilgrim must circle. The primary item in the kaaba is a meteorite called the Black Stone. Believers think this meteorite is a stone from Paradise: after all, it fell from the sky. According to tradition, the kaaba was originally built by Adam and Eve, and then rebuilt by Abraham. Other researchers have suggested that it was one of many such structures in Arabia prior to the birth of Islam, but owing to the importance of Mecca to Mohammed, it was the only one to survive. It is certain that it was used in the polytheistic rites of the pre-Islamic Arab religion.

Non-Muslims are not allowed within the city proper.[1] This applies year-round. In fact, when French troops got a special permission

to enter the city in 1979, one Osama bin Laden took this as an insult to Islam.

Medina is the second-holiest city in Islam after Mecca. Located in western Saudi Arabia, Medina is where Muhammad settled after the Hejira; it is also the place where he was buried. Jerusalem is the third holiest city in Islam. It said to be the place from where Mohammed ascended to Heaven. In Shia Islam there are a further seven: Karbala, Baghdad, Najaf and Samarra are all in Iraq; Masshad, Qom and Shiraz are in Iran.

Manāt was one of the three chief goddesses of Mecca, along with Allāt,

[2] She was the goddess of fate and had the oldest idol in Mecca, as well as being the wife of the primary god Hubal,

whose idol was once placed on the Kaaba. 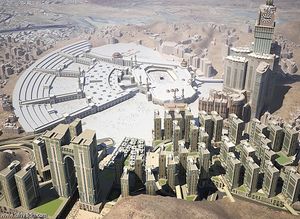 that were perceived to be contrary to Wahhabism. The pace of destruction has accelerated since the beginning of the 21st Century, including turning the house of the Prophet's first wife Khadijah

into a toilet block, and dynamiting an entire mountain containing the Ottoman-era Ajyad Fortress.

The end goal, now realized, is to create a glittering array of skyscrapers, shopping malls[3] and luxury hotels, including a massive Big Ben-like clock tower.[4][5] There's even a goddamned KFC.[6] Rich and poor Muslims now stand side-by-side at the Hajj as 'equals' under the shadow of massive skyscrapers. Even protest notes by fellow Muslim countries like Turkey could not sway the iconoclast fervor of the Saudi regime.