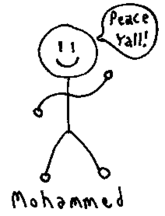 An example of the godless blasphemy promoted that day.

Everybody Draw Mohammed Day was held on May 20 2010 after the producers Trey Parker and Matt Stone of South Park received death threats for depicting Muhammad in a bear costume (well, some characters briefly believed it was Muhammad in a bear costume, but it turned out to be Santa). The addresses of South Park Production Company and Comedy Central were posted with a suggestion that Muslim extremists should 'pay them a visit'.[2]

Prior to the first airing of the offending South Park episode, Comedy Central had already bowed repeatedly to pressure, concealing Muhammad with a black bar for the second time in his three appearances on the show (he was depicted openly in his first appearance) and censoring every utterance of his name in the broadcast version of the episode. Comedy Central subsequently refused to allow the episode to be streamed on the official South Park website, having apparently never heard of the Streisand effect, and pulled streamed versions of the preceding episode as well as the much earlier episode which had depicted Muhammad openly.

Other cartoonists have also received death threats after depicting Muhammed. The most famous incident known is the Charlie Hebdo attacks.[3]

On April 20, 2010 cartoonist Molly Norris posted a drawing of Muhammad to the Internet with a suggestion that "everybody" should make similar drawings. Following death threats the FBI advised Norris to conceal her whereabouts and as of 2015 she is still hiding.[4]

It was hoped if many different people followed suit, Islamic militants could not target individuals with threats or violence. The event went viral with thousands of drawings submitted to Facebook and thousands of protests. People connected with the movement say they received death threats.[5] Reaction was mixed: some commentators felt the initiative was good and helped counter efforts by Islamic extremists to prevent free speech. Others felt some cartoons were unnecessarily offensive and hurtful to moderate Muslims who did not attack free speech.

The government of Pakistan temporarily blocked Twitter though there are suspicions they were testing blocking technology that they can later use for other censorship.[6] Saudi Arabia and India also temporarily banned Facebook. Facebook pages with images connected to the campaign inexplicably went down; one page ended up for a long time with nothing but Nazi comments and symbols resembling Nazi swastikas. Images that appeared were surprisingly tame in views of the emotion involved. Disturbingly some people involved suspected that their emails were hacked and feared personal information was given to Muslim extremists.[7] Some Muslims took up the challenge to... draw their friends named Mohammed which happens to be one of the most common names in the world, presumably after 'John Smith' and before 'Meiyghayn'. [8]

Anwar al-Awlaki responded by declaring that Molly Norris deserves to die and go to hell.[9] Given this sort of disproportionate response to what was really a moderate campaign, one might be tempted to tell Anwar al-Awlaki to go to hell.

There has been talk of reviving Everybody Draw Mohammed Day and shifting the date to the 7 January which is the anniversary of the 2015 attacks on the Charlie Hebdo office. Some view the prospect favourably while other people feel it would offend peaceful Muslims unnecessarily. [10]

This Islam-related article is a stub.
You can help RationalWiki by expanding it.
Retrieved from "https://rationalwiki.org/w/index.php?title=Everybody_Draw_Mohammed_Day&oldid=2070972"
Categories:
Hidden category: