Medina, known in Arabic as Al Madinah Al Munawwarah (المدينة المنورة, or "The Enlightened City"), is a city in the Hejaz region of Saudi Arabia that is widely considered the second holiest site in Islam. Its religious significance mostly derives from the presence of the Masjid al-Nabawi, the Prophet's Mosque, which was personally commissioned by Muhammad and now serves as his burial place. Although it's not required like the hajj, many pious Muslims undergo the ziyarat, a pilgrimage to Medina and other sites that were significant in Muhammad's life.[2]

Probably even moreso than Mecca, Medina served as the prophet's home for most of his post-Islamic life. When he kick-started the Islamic religion, he and his followers eventually had to flee Mecca due to persecution by its pagan religious authorities.[3] He eventually ended up in Medina, where the infighting city leaders petitioned Muhammad to help them sort things out by using his legal skills to draw up a constitution to ensure fairness for everyone.[4] Muhammad naturally used the opportunity to put himself in control of the city and begin the process of converting its population to Islam. Medina had long been on unfriendly terms with Mecca, and this eventually culminated in a war which left Medina victorious.[5] Muhammad then used that as a springboard to unify most of Arabia before his death in 632 CE.

Although many religiously significant sites remain in Medina, the city was not spared from the Saudi regime's iconoclasm and many of its historic buildings and artifacts were destroyed.

The Masjid al-Nabawi, or the Prophet's Mosque, is the second holiest site in Islam. The original structure was ordered to be built by Muhammad himself shortly after his arrival in Medina in 622 CE. Back then, the qibla, or direction of prayer, was towards Jerusalem, and the building had to be extensively remodeled after Muhammad decided that the qibla was to be facing Mecca instead.[7] After Muhammad's death, his corpse was left where he had passed, in his wife Aisha's house.[8] The mosque was ordered to be expanded by later caliphs to incorporate his tomb within it. His tomb lies next to the tombs of the first two caliphs Abu Bakr and Umar in the southeast corner of the mosque, identifiable by the distinctive green dome placed above it.[9] The "Sacred Chamber" where the prophet and his two companions are buried is blocked off by golden gates with viewing ports; there is an empty space for a fourth tomb due to the traditional Islamic belief that someday Jesus will be interred there.[6]

Since then, the structure has been expanded numerous times to make room for the ever-increasing numbers of religious pilgrims who wish to see the tomb of the prophet. The mosque became the model for later Islamic architecture.[10]

Islamic tradition holds that a prayer at the Prophet's Mosque is worth 1,000 prayers at any other mosque save for the Great Mosque of Mecca.[11]

Once a space with great monuments, the Al-Baqi graveyard suffered total destruction on multiple occasions at the hands of the Saudi royal family.[12] It was used as a cemetery for Muhammad's closest companions and many of his early followers; stories tell that Muhammad would visit there often to pray over their bodies.[13] Succeeding Islamic rulers built great structures there to honor the dead, but the after the Saudi takeover they destroyed those monuments and did their best to keep every grave unmarked and anonymous. The Saudis and other followers of Wahhabism believe that marking graves is a great sin because it encourages reverence.[14] Before then, the graveyard was supposed to have resembled a small city with domes and mausoleums to honor the prophet's companions buried around the site.[15]

People buried there include all save two of Muhammad's wives, his infant son Ibrahim, and many of his daughters and closest companions.[16] 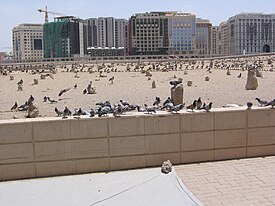 Once a historic holy cemetery, now some bumps in the ground for pigeons to play in.

The Saudi regime follows the brutally iconoclastic interpretation of Sunni Islam, and their radicalism led them to destroy a huge portion of Medina's landmarks and historic sites. From their very first occupation of Medina in 1806 and again following their final conquest of the city in 1925, the Saudis systematically destroyed much of the city in order to prevent pilgrimages to attractions there.[18] The Saudis hated that the city's holy sites drew pilgrimages, as those religious traditions had not been drawn directly from any scriptures.

The Saudi campaign of destruction caused the removal of such sites as the graves of the martyrs of Uhud, and the Baqi graveyard.[19] At the Baqi graveyard were the graves of Muhammad's sons, aunts, and even his father. Many of his wives including Aisha were also buried there. The Saudis temporarily turned the historic graveyard into a garbage dump, demonstrating their disrespect and ensuring that the graves can never again be definitely identified.[19]

The Saudis even considered destroying Muhammad's tomb itself, although they stopped short due to Muslim outcry. They still occasionally float the idea, most recently in 2014 when they proposed dumping his body in an unmarked grave.[20] Hope they don't do it, at the very least because the action would prompt enormous unrest and violence from the Muslim world.