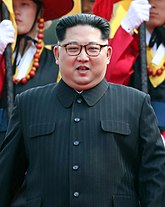 So that's where all the food aid went.

The Michelin Man Big Brother "Little Rocket Man" Kim Jong-un (born in 1984)[2] is the current owner of North Korea, which he inherited from his father — the "dear leader" Kim Jong-il — and one of the youngest state leaders in the World.[3] He is also the sexiest man alive[4] and the "greatest military commander in the world."[5] After the death of Jong-il on December 17, 2011, Jong-un was publicly declared the "Great Successor," and continued his father's tradition of having pictures taken of him looking at things. Allegedly, Jong-un was privately declared the successor in 1992 at age eight.[2]

In April 2020, there have been many conflicting reports of his health. He missed the biggest North Korean holiday, Kim Il-Sung's birthday, on April 15.[6] CNN reported that he had a bad cardiovascular surgery, leading to him being in "grave danger".[7] Different sources say that he is dead,[8] not dead,[8] or just trying to avoid the rona.[9] He is a lot like Schrödinger's cat.

Kim Jong-un shows signs of following in his father's and grandfather's footsteps,[note 1] claiming that he invented gravity[citation needed] (thus leading one to wonder exactly how people stayed on the ground before he was born unless Kim Jong-il and Kim Il-sung just used their divine power to keep people on the ground for the last few thousand years, of course), has invented a miracle cure for AIDS, cancer, and Ebola, learned to drive when he was three and won a yacht race when he was nine. Oh, and he actually thought that Dennis Rodman was Barack Obama. This is pretty much the extent of what is known about him and it's entirely plausible that this is also the extent of the CIA's file on him.

Following the death of the second Kim, he managed to forestall the chaos that some expected to happen — and by "chaos" we mean internal collapse, not the Armageddon that he will face from the USA, South Korea, and even China if he continues with his nuclear dick-waving. That said, there have been reports that his ascent to power triggered infighting inside the North Korean Army;[10] this culminated in the public execution of Jang Song Taek, his Number Two and uncle, in late 2013,[11] along with most of Jang's family.[12] [13]

A few months later Kim replaced his next Number Two, Choe Ryong-hae, in a process occurring at a rate that started to get interesting.[14] Or rather, terrifying.[15]

In 2016, he apparently had a senior education minister executed with an anti-aircraft gun for falling asleep during a meeting – an action which was claimed to constitute an insult but in reality just provided an excuse to keep purging the "old-guard" so they can be replaced with Kim's own sycophants.[16]

In February 2012 reports spread that the Chinese Internet was "alight" with gossip that a "team of ninja assassins" had assassinated Kim in Beijing.[17] The North Korean government did not comment on this, and given the track record of the Internet rumor-mill at correctly reporting people's deaths it was obviously not true either way.

Speculation flared up again in September 2014 when North Korean state media uncharacteristically presented Kim walking with a limp and experiencing "discomfort"; after a week-long absence (like the ones Kim Jong-il took in his later years), he began using a cane in public.[18] While it is still unlikely that he might kick the bucket in the near future, the scenario is now rattling policymakers because the regime would have no clear successor.[19] Stay tuned.

Seth Rogen and James Franco released an action comedy in December 2014 called The Interview, about two journalists who plan to assassinate Kim. The North Korean government initially declared this "an act of war" and petitioned the White House to stop the release of the movie.[20] No, it didn't end there: hackers associated with the DPRK then engaged in a massive cyber-attack on Sony Pictures in an attempt to cancel the screening of the film, providing the basis of one of the biggest manifestations of the Streisand effect yet.[21]