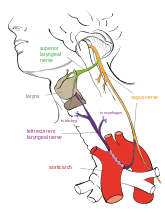 The nerve in humans

The laryngeal nerve is a nerve branching down from the vagus nerve towards the larynx. It then branches into the superior and recurrent laryngeal nerves (RLN), of which the latter is remarkably interesting from the point of view of evolutionary biology. Because of the inefficiencies of the routing the nerve takes, it's often hailed as one of the most striking cases against intelligent design — or at least calls into question the "intelligence".

In biological homology, the laryngeal nerve can be spotted in a wide variety of animals, from fish to mammals. The structures around the nerve and the nerve itself are homologous to each other and so evolutionary theory postulates that animals evolve from others by distortions and changes in these structures. In fish, considered to be more evolutionarily primitive, the nerve heads straight from the brain, down to the larynx. However, in mammals, the structure of the head and development of the neck from fish-like organisms cause the recurrent laryngeal nerve to become "trapped" under the aortic arch in the thorax. Given a slow and gradual evolution from the biology of a fish to the biology of a mammal, there is no way for the nerve to magically jump from one side of the aortic arch to the other. And so, in mammals the nerve controlling the larynx first delves deep into the chest cavity and then finally up to the larynx.

This considerable detour is consistent with how embryological development entwines with evolution, but less consistent with the idea that organisms were made as they appear today, individually by an intelligent designer.

The giraffe is a mammal known most famously for its long neck. True to biological homology, the recurrent laryngeal nerve of the giraffe also routes via the thorax and under the aortic arch, a considerable detour. While in humans this is a detour of mere inches, in the giraffe the nerve is around 15 feet long.[1] It has been suggested that this plays a part in why giraffes can only make a limited number of low frequency vocalisations[2] and this may have contributed to the legend that the animal makes no noise at all.

An episode Inside Nature's Giants covering the giraffe demonstrated an extraction of the full nerve from the neck.[3]

In the present-day dinosaurs (birds), the nerve is present.[4] As the recurrent laryngeal nerve is common to all tetrapods, it's a reasonable assumption (although still speculative as soft material such as nerve cells do not fossilise) that it was also present in extinct dinosaurs, and notably the long-necked sauropods. The same can be said for whales, although the dissections to remove such a nerve from a whale would be tricky.[5][6] While the giraffe's RLN is about 5 metres (15 feet) in length, other long-necked animals such as the Supersaurus would have had nerves up to 30 metres (~100 ft) long. 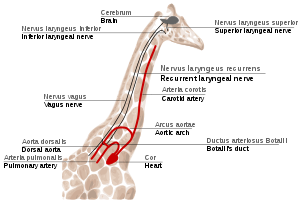 A 15 foot detour is a good design?

Not to be stumped by such a design flaw, creationists have come up with a vague explanation of why the recurrent laryngeal nerve is an example of (piss-poor) design. In a piece by Jonathan Sarfati for Creation Ministries International,[7] it's suggested that the laryngeal nerve is the way it is due to embryological development. This is indeed true, and matches pretty well with what evolution suggests — and expressing a certain phenotype comes from embryological development.[8] However, it still doesn't address why the nerve starts on the wrong side of the aortic arch in the first place, as presumably any intelligent designer would be able to set up an embryo to develop into the final design with relative ease. Effectively, the argument amounts to no more than asserting that known embryological development does not rely on evolution, when it forms a key part of the theory.

But, not to be deterred even by this little problem, Sarfati's piece really just attempts to assert design even though there are few features of design involved. For example, citing John Woodmorappe's review of Why Evolution is True in the Journal of Creation, an analogy is drawn to the "curious wiring" of a car, where a front-engine features a long and exposed exhaust system. This is a curious analogy, as the position of an exhaust in a car is fairly arbitrary in comparison to the position of the engine — as anyone who has paid attention during the car-bits of Top Gear will be aware, engine position matters quite a bit. Yet, there seems to be no apparent benefit to an extensive routing of the nerve supplying the larynx. So, what are the supposed advantages to this bizarre detour in the recurrent laryngeal nerve?

According to Sarfati and others, this is because the vagus nerve and its offshoots also connect to the heart, and is bound up in embryology. As the heart is a requirement, it takes priority and the nerve connects as it does in fish. During development, it becomes trapped. However, this only really amounts to some special pleading on behalf of design — it effectively describes nothing more than evolutionary theory would suggest, except tacks goddidit to the end. Make no mistake, as an explanation this achieves as much as saying "because the Flying Spaghetti Monster wanted a laugh". It does leave a few curiosities about the supposed intelligence of the designer, however, which are unanswered by this non-explanation. It effectively makes the larynx an afterthought in the design process; as if it was only a by-product of the nerve's existence rather than an aim, despite communication and language being so important to humans. But the designer, given omnipotent powers to yield creatures as She sees fit, doesn't think to merely alter the branching points of the nerves instead? This is a very counter-intuitive approach design at the very least.

Talking about what good and bad design consists of is, however, a red herring in this case. The point is that practically every feature of biological homology supports common ancestry. Evolutionary theory predicts certain things can change while others can't. The length and position of the neck may change slowly over time, but the sudden re-routing of a key nerve in a completely different way shouldn't. Tacking on design, or questioning that the design's purpose may not be fully realised forms an "escape hatch" argument — it's an explanation that is irrefutable because it doesn't actually provide an explanation to refute.

This is the real moral of the laryngeal nerve's story: it is entirely consistent with what evolutionary biology would predict. Even by attempting to shoehorn the concept of design into there, intelligent design simply reaffirms itself as unfalsifiable pseudoscience.