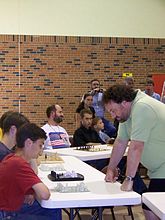 Sarfati (right) playing chess against multiple players. This chess match has been going on for 13.5 days, but he insists it was really just 6.000 minutes and holds up a broken sundial as evidence, in spite of several large working clocks in the room.

Jonathan Sarfati (1964–) is an angry man and vocal proponent of Young Earth Creationism. Despite his own insistence on using logic he often resorts to emotional appeals and name calling.

He is also startlingly ignorant of what the Theory of Evolution is. In Refuting Evolution he describes the theory as being "not just about ape-like creatures turning into humans [...] [but] a philosophy trying to explain everything without God."[1]

See the main article on this topic: Creation Ministries International

He supported CMI in its internecine schism (1993/2005 onwards) with Ken Ham's US-based Answers in Genesis (AiG). CMI and Sarfati suffered in this conflict, as Ham stole CMI's magazine-subscriber list and substituted his own publication, denying CMI of much of its income. Sarfati showed poor judgement in supporting CMI's CEO, Carl Wieland, as the vendetta was largely between Ham and Wieland and if Sarfati, as a CMI "luminary", had shown Wieland the door early in the multi-year dispute, CMI's position could have been salvaged. As it is, CMI was dealt a mortal[citation needed] blow.

Detecting an insufficient market in Australian churches, Sarfati found himself forced to try and crack the U.S market with a speaking tour. CMI's website no longer lists him as a member of its Australian staff, but instead as with its "U.S. Office". Some evidence suggests that lingering animosity from Ham's AiG has AiG sabotaging Sarfati's efforts in the U.S.[2][3]

Sarfati has done proper science (i.e. not creation science) in his career. He is a physical chemist with a B.Sc with third class honours, and a Ph.D.[4] He has published several papers in secular scientific journals, including in Nature, the most cited scientific journal in the world.

Today, even in his work at CMI, Sarfati is a critic of much undoubted pseudoscience, such as geocentrism[5] and flat earth nonsense,[6] while he also supports vaccination and rebuts anti-vaccination arguments.[7]

He is also a chess master,

was New Zealand's national chess champion in 1987–88, and managed to play a draw against Boris Spassky.

Sarfati's ability to sell books or to gain speaking engagements is based on his perceived authority within creationist circles, and his status as a "towering intellect". Thus much material on CMI's website and in their printed matter is cringe-inducingly laudatory.

One article, An Awesome Mind,[8] incorporates hyperbole such as:

If such fanfare fails to drive home the point, the article goes on with a section titled Audiences in awe, describing Sarfati's unsurpassed abilities. In relation to an exhibition of his chess skills,

The article concludes that Sarfati is a "privilege to know".

Interestingly, Sarfati is himself the chief editor of the Ex Nihilo magazine in which this piece appeared. This piece (one example of many) carries the byline of Gary Bates, Sarfati's colleague, who works "one desk over" from Sarfati. Sarfati's self promotion has reached such giddy heights it would make a North Korean dictator blush.

One of Sarfati's staunchest allies is Gary Bates, author of Alien Intrusion: UFOs and the Evolution Connection.[9] Bates is a fervent supporter of the Christian UFO movement[10] along with Hugh Ross. As with all things creationist, the true account of UFO-related phenomena is found in the Bible (demons and angels), but this true account is covered up by the liberal, atheistic government conspiracy.[11]

Sarfati's debating technique is infamous for a "take no prisoners" approach that is so offensive, it regularly brings the reproach of other, more ironically-minded Christians. A Christian review of Sarfati's Refuting Compromise[12] says Sarfati is "blinded by his own ideology and has probably never honestly and open-mindedly faced the main issue about which he writes", noting that Sarfati attacks Old-earth creationist Hugh Ross as a false teacher in need of Biblical rebuke. This is typical. Sarfati frequently retreats to "X calls himself a Christian, but..." succumbing to the classic "No True Scotsman" logical fallacy. Sarfati repeatedly and clearly implies non-Young Earth Creationists are barely saved, and are otherwise misguided, apostate, ineffective or tools of Satan for failing to take a literalist, presuppositionalist approach to scripture. This approach is typical of the more histrionic Creationist organisations, but Sarfati is its exemplar: Giving lip service to the idea that other Christians can sincerely disagree about doctrine without heresy, but taking the gloves off in personal argument, conducting desperate ad hominem rejoinders, and casting aspersion on any adversary's salvation or motivations.

Comments on fora where Sarfati has editorial control reveal repeated instances of Sarfati removing comments from those who rebut him and him then crowing over his "speechless" opponents. Sarfati also regularly retreats to name calling, referring to "celebutards" or "Commissar Obamov".

Sarfati has been known to employ the nom-de-guerre "Socrates" in online forums,[13][14] even when commenting on himself. This is sufficiently well known that it is unlikely he still uses it when aiming for anonymity.

CreationWiki has a page about Jonathan Sarfati