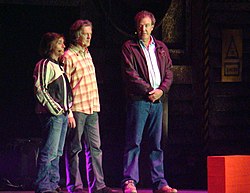 The presenters Richard Hammond, James May and Jeremy Clarkson in 2008.

Top Gear is a BBC television show focusing on cars, and the bigger and faster, the better. It is known most famously for its second incarnation, which started in 2002, which concentrated on the boyish antics of its three presenters: Jeremy Clarkson, Richard Hammond, and James May. If nothing else, the show has a relatively high production value, spending quite a bit on the episodes and shooting way more footage than ever makes the air — even compared to other similar shows.

One may be asking why exactly a hit UK TV show featuring three grown men who are paid to act out every 11 year old boy's fantasies with race cars, super cars, and rocket cars is relevant to RationalWiki. Top Gear is known as much for the controversies caused by its features and presenters as it is for its award winning entertainment value. So much so that the Criticism of Top Gear

article on Wikipedia is almost the size of the article on the original incarnation of the show.

Despite this controversy, it remains phenomenally popular with viewers on both sides of the political spectrum, in part because even when factually challenged, its over-the-top antics remain so entertaining that most viewers can't help but find it amusing. Even the hosts actively advise people against taking the show or things said on it too seriously. In an interview on 60 Minutes, Clarkson, perhaps erroneously, states that there is statistical proof that he himself is not an authority on automobiles, citing the time he reviewed a car he described as dull and boring which went on to become the bestselling car in Britain, and a car he praised which went on to become a flop in the market.

With regular reviews of fast and powerful cars, usually with a focus on how fast they can go around the Top Gear custom racetrack, the show has been criticised for promoting irresponsible driving.[1] This reached a climax in May 2008 when Clarkson admitted to taking a car to 186 mph on the road.

Environmentalists and those with a scientific background criticise Top Gear very regularly for their promotion of fast cars with a high environmental impact. Clarkson himself is often an outspoken denialist of environmental concerns and global warming and many environmental concerns are frequently mocked on the programme. The show's review of the Tesla electric car was less than favourable, with the vehicle being shown to break down repeatedly on the broadcast program in 2008. In 2011, however, Tesla disputed the show's claims (since 3 years earlier it was a low-key start up firm) claiming that the car was driven inappropriately[2] (leading to the poor performance) and that the break-down was scripted in advance.[3] Tesla Motors sued the BBC for libel and malicious falsehood, but didn't win.[4][5]

However, many recent shows have focused on "endurance" challenges where the cars were made to travel as far as possible on as little fuel as possible, from London to Edinburgh and back on a single tank, for example. In many of these challenges, the presenters conclusively show that by driving sensibly and picking the right car, almost 100 mpg[note 1] could be achieved.

In one episode, the presenters were shown "accidentally" setting fire to a caravan (called a "camping trailer" by the Americans). This, along with several other stunts, were shown to be faked and partially scripted beforehand. The response of most sensible people was to suggest that if anyone thought that some of the stunts were real, they should have their head examined. They pulled a similar stunt in a challenge involving building their own motor homes - although by this point people were too used to Top Gear being a half-staged sketch show to care.

Despite this, one thing that was famously not faked was when over the course of two episodes they attempted to test a Toyota Hilux pickup truck to destruction, with such activities as careless driving, parking it where the tide would "drown" it in the saltwater Bristol Channel, dropping a caravan on top of it, driving it through a wooden shed, hitting it with a wrecking ball, dropping it from a crane, setting fire to it, and ultimately parking it on top of a building that was then demolished by implosion, and after every single one of those tests, it still started up and still drove back to the Top Gear Test Track. After it survived the building demolition, the pickup was retired to a pedestal of honour in the studio, and every few months it is started up again and driven around some to test whether it still works (which thus far it still does). This was notable because the BBC expressly forbids product placement on its programs. In response to this, Toyota named a new model of its Hilux the Invincible.

During a special "Polar Challenge," in which the presenters raced across the Arctic to reach the Magnetic North Pole, Jeremy Clarkson and James May were shown drinking gin and tonics while driving (Clarkson even asked May to "slow down while I cut the lemon"). Despite criticism and complaints from the BBC Trust's editorial standards board regarding this, Top Gear's producers defended them, claiming that they were only drinking while driving, not actively drunk.[6] And during that scene, the two presenters said that they were driving over international waters (They were on the frozen Atlantic) so they were not drunk driving, they were drunk sailing.

The show must go on[edit]

In September 2006, presenter Richard Hammond was involved in a 288 mph crash while driving a jet-powered car. He lived to tell the tale and returned to the show for the following season to promptly have the piss taken out of him by the other two presenters.

In 2015, Clarkson took the exit slip after allegedly assaulting a producer.[7]

The enigmatic and perpetually masked "tame racing driver," known as The Stig, has been a mainstay of Top Gear since it relaunched. The first Stig, who dressed in black racing garb and helmet (and thus imaginatively called "Black Stig") was played by Perry McCarthy — and was "killed off" at the start of series 3 by driving off the edge of an aircraft carrier while trying to race a jet fighter, after a Sunday tabloid revealed his identity and McCarthy confirmed it in his second edition autobiography. McCarthy's "Black Stig" was replaced by the "White Stig," who lasted the next dozen or so series while successfully evading his identity being revealed (though in truth his identity was rumbled almost immediately, it was just never officially confirmed). Following the release of his autobiography, it was revealed that it was rally driver Ben Collins behind the white helmet and shield. It's notable that the BBC attempted to block publication of Collins' book (some say it was a misuse of the license payers money) in order to protect their privacy agreements and The Stig's established mystique — although even after all this trouble the BBC have still refused to confirm or deny that Collins is/was The Stig, and James May insists that he's The Stig. This led to accusations that The Stig "sold out" from fans on his Facebook page. A second identical "White Stig" was introduced in the 2010 Christmas special, and Ben Collins appeared as himself in the final edition of the 2011 series, with Richard Hammond acknowledging his history with the show. There is a clause in the Stig's contract stating that if he ever publicly outs himself as the Stig, he is automatically fired.

Remember all those negative stereotypes of ignorant Americans? Well, it's all true... sort of.

In 2007, Top Gear went to the US (Americans have always held a special place in Jeremy Clarkson's heart) to see if it was cheaper and easier to buy a used car and sell it at the end of the holiday than to rent a car while there. It started badly when trying to buy a used car, Clarkson was told that he'd very likely get shot if he walked down the wrong street.

As part of the challenges in the US, the team of presenters were instructed to drive through the state of Alabama, gaining points for not being shot or arrested and bonus points for getting one of the other two shot or arrested. Just before entering the state, the team got to work sabotaging each others' cars with various slogans such as "man love rules OK," "NASCAR sucks," and "Hillary for President."[8] Naturally, the locals weren't too impressed by this move. While pulling up to refuel, the group were confronted by a woman who said they were suicidal driving through a hick town with those slogans written on their cars and claimed she would "get the boys around." Moments later, a truck of people carrying guns turn up and attacked them, throwing rocks at the car and crew. The camera then went black in a Blair Witch Project moment and was next turned on showing the cars battered and the crew taking measures to remove the "offending" slogans. To the best of anyone's knowledge, this section wasn't a setup.[9]

Upon arrival at their destination in New Orleans, they were supposed to sell their cars for as much as possible, thus completing the aim to see if it was more economical to buy than rent. However, met with the devastation of Hurricane Katrina (which was nearly three years previously at the time of airing) they decided to donate their cars instead.[note 2] Clarkson closed the episode with an anecdote that a lawyer had attempted to sue them for mislabeling their Camaro with the wrong year, even though it had been given away free.