From RationalWiki
(Redirected from Ley lines)
Jump to: navigation, search

One of Watkins' maps

Ley lines are supposed geometrical energy lines that lie under the Earth. Our ancient ancestors[note 1] supposedly knew about them, and placed neolithic sites such as Stonehenge and Newgrange directly on these ley lines, connecting the monuments to The Energy and to each other.

This ridge is the site of an alleged ley line

British archaeologists in the early 20th century, particularly Alfred Watkins, author of The Old Straight Track, suggested that ancient roads or paths ran in straight lines connecting ancient religious sites around Britain. Watkins believed that these were simply roads, not flows of energy. He argued that natural features such as hilltops had been utilised as route markers and that further religious sites had developed along, or at the intersections of, these alleged pilgrimage routes. He claimed that structures such as pre-Christian burial mounds and early Christian churches could be found located along alignments connecting major prehistoric sites such as Stonehenge, Avebury, etc. This was in itself a rational hypothesis. If Stonehenge and other megaliths were religious sites, travel routes connecting them would not be surprising. People could have made pilgrimages from one megalith to the other following some sacred route. However, the existence of these paths was disputed because:

Critics argued these alignments simply resulted from the perception for those who are looking for a pattern.

Nevertheless, the concept of ley lines has been seized by occultists, New Agers, Neopagans, dowsers, ufologists and others, who claim that they are in fact invisible lines of mystic or natural energy, and that places where ley lines converge or intersect are especially powerful or eventful locations. Ley line theories also commonly feature in fantasy novels.

Proponents of 'Earth energy flows' at some point abandoned the original concept of straight lines (for some unspecified reason) and claimed the existence of curved lines of alleged energy flows, such as the 'Michael line' and 'Mary line' which are alleged to intersect at Glastonbury Tor.[1] 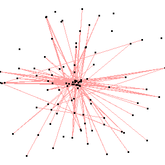 The absurd nature of ley lines can be demonstrated in numerous ways. A process similar to most New Age ley line enthusiasts was applied by math lecturer Matt Parker in 2009 to work out where Woolworths stores would have been in the far, far past of 2008.[2] For History Hack Day 2011, web author Tom Scott developed a tool to demonstrate that anywhere in England could be said to fall on three mysterious ley lines — including at least one that passes through Stonehenge.[3] In short, if you ignore the misses and selectively report your hits, you can make magic ley lines out of anything.