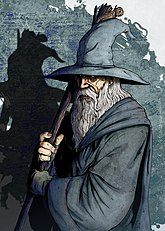 Fantasy is a genre of fiction often shelved with (and confused with) science fiction. Fantasy writing usually involves magic, or magical or supernatural creatures. Fantasy is generally distinct from science-fiction as it usually does not invoke scientific themes or future realities. However, several writers such as Jack Vance and Gene Wolfe blur the boundaries between science fiction and fantasy and may indeed look to the future as much as more typical science-fiction authors. The fantasy genre stereotypically features lighter style and themes, though there are notable and quality exceptions to that stereotype. Several noted science-fiction authors have also written fantasy, and several science-fiction awards, magazines and associations also deal with fantasy (and sometimes horror), and vice versa.

The fantasy genre often draws on mythology, giving it a familiar feel to readers. Rather than completely newly-created space monsters or speculations on what robots might become, English fantasy-novels often feature magical creatures such as elves, dwarves (or dwarfs), fairies, dragons, and unicorns, some of them drawn from classic mythology and some of them completely made up. A feeling of the medieval era - building on a Gothic genre tradition - often pervades fantasy writing, with knights, lords, wizards and clerics, and a very feudal feel. "Sword and Sorcery" and "High Fantasy" have become two of the most common sub-genres of fantasy, and are usually what casual readers think of when they think "fantasy". Urban fantasy dealing with fantastical themes in a contemporary setting is also gaining popularity.

The most famous and even archetypal work is The Lord of the Rings,

a story about a volcano, by J.R.R. Tolkien.

The precursor to the fantasy genre is the non-religious telling of myths. That is to say, reading myths outside of their religious contexts, as simple works of interesting fiction, by someone who is not part of that culture. Works like The Epic of Gilgamesh, the Odyssey, or even Biblical stories have this sense of fantasy, when the religious contexts are incidental.

A sort of "proto-fantasy" genre would include such works as 1001 Nights, Beowulf, fairy tales, and the Arthurian legends.

What could be understood as modern fantasy probably began in the mid 1800s. The English fantasy genre includes classic stories such as Peter Pan, The Wizard of Oz, and Alice in Wonderland. In the early 20th century with the development of pulps and adventure stories, several authors such as Edgar Rice Burroughs, Robert E. Howard, H. RIder Haggard, Clark Ashton Smith, and H.P. Lovecraft gained popularity writing more fantastical works, and several magazines focused on science fiction and fantasy stories were formed. However despite the wealth of works using supernatural themes, fantasy was never considered its own separate genre until years later with works such as The Lord of the Rings and The Chronicles of Narnia, which are considered to be the most influential works in the genre, although several authors such as Mervyn Peake, E.R. Eddison, and Lord Dunsany, arguably wrote modern fantasy before then.

Because fantasy has stereotypically worked on "Black and White", "Good vs. Evil" scenarios[note 1], some Christians have found themselves drawn to several authors. The fantasy author who weaved Christian themes most heavily into his work was C.S. Lewis whose works were so obviously Christian in theme that even his friend and fellow fantasy author J.R.R. Tolkien, also a devout Christian (he had led Lewis to his conversion), criticized him for it.

However, since the genre is, almost by definition, filled with magic, other Christians, notably the fundamentalist kind, find nothing good in fantasy, and frequently warn schools to avoid such works as Harry Potter, Alice in Wonderland[note 2] and the ever so threatening James and the Giant Peach[1].

Several fantasy works that argue against religion also exist, one of the most famous examples being Philip Pullman's His Dark Materials series. Other noted fantasy authors, such as Terry Pratchett, China Miéville, comic book writer Garth Ennis, and fantasy/horror critic S.T. Joshi, are also open atheists. A few other notable atheists such as Stephen Fry and Terry Gilliam have also dabbled in the genre. Yet another Terry, Terry Goodkind

was also scathingly critical of religion (and commies) though that has more to do with him being a Randroid.

Like everything else in the "Let's classify it" mindset, there are a host of sub-genres of fantasy, many of which fall equally into adventure, horror, science fiction, or romance.