Longroom.com was a small, now defunct website that provided two things: pro-Trump news and "unskewed" polls. Nobody cared about its news (clickbait aggregated from other sites). Its polls were a different story.

Longroom rose and fell in the space of a few weeks.[2] Immediately following the Democratic National Convention, polls had Clinton up 8% -- yet Longroom predicted Trump victory by about 1% and promised that its polls were free of "media bias" (a bullshit term not used in statistics).[3] As a result, it was heavily promoted by Trump supporters as a more reliable polling source.[4][5][6][7][8][9][10][11][12][13]

Polling website 538 ran two articles discussing the poor methodology and sketchy identities of Longroom's founders.[14][15] Soon afterward, Longroom went offline. While dead, Longroom served as fertile grounds for conspiracy theories about how the Clintons had covertly eliminated another whistleblower. There is no evidence to support this, but when has that stopped conspiracists before?

Methodology (a long shot from valid)[edit]

Longroom claimed that it was adjusting for "media bias". After adjustment for this bias, Longroom always predicted Clinton and Trump in a tight race, usually with Trump winning by 0.1-1%. How did they do it? Longroom wrote:[16]

The LongRoom Polling Analysis uses the latest voting data from each state's Secretary of State or Election Division. The voting data is kept current by incorporating the latest updates from each state as they become available. This means that the LongRoom Polling Analysis accurately reflects the actual voting demographics, precinct by precinct, county by county, and state by state. [....] At LongRoom we use the actual state voter registration data from the Secretary of State or Election Division of each state.

Longroom states that it made sure the percentage of registered Dems and registered Reps were the same as they were on voter registration forms. Frankly, this data does not exist. As 538's Harry Enten writes:[14]

Beyond that, Longroom provides no numbers to back up their methodology whatsoever -- suggesting that it's not a methodology at all.

Longroom's "methodology", in practice, appears to have been to shift every poll Trumpward until it's a tight race. As proof: Of the dozens of polls they cover, only one (Quinnipiac 6/21-6/27) is asserted to have a Republican bias.[17] 538 compares pollster's results to actual results and determines their bias; the split is almost exactly 50/50.[18]

Owners (took a long walk off a short pier)[edit]

Exactly who ran Longroom is unclear. The Longroom "About Us" page listed four editors:[22]

[I]n April 2015, LongRoom switched its registration to a domain that for a fee, allows registrants to keep their names private — Domains By Proxy, LLC. The last name associated with the website, as recently as January 2015, is Fred Waid, who listed the site’s associated organization as “American Separatist” based out of New Mexico.

How strange that someone claiming to be part of an antigovernment organization should proceed to support Trump. 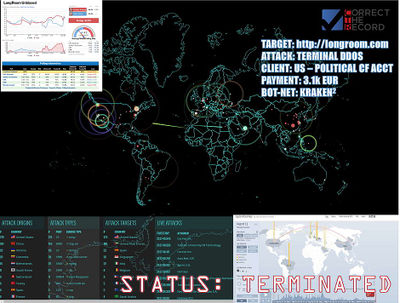 Despite having the power to liquidate websites on will, the Clinton Foundation failed to realize that Jim the Janitor could simply screenshot their nefarious plans. (Image from "RealTrueNews"[33])

Many Trump supporters believe that Hillary had Longroom.com taken care of before it could spoil her plans.

How did she do it? Methods include:

This is patently ridiculous:

In the final popular vote, Trump got 45.99% to Clinton's 48.08%.[49] This shows the irrelevance of polls that look at the overall vote rather than considering outcomes on a per-state basis.