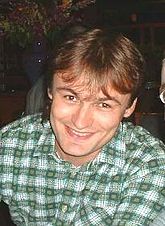 Shirt to match the below navigation templates. Coincidence?

Luboš Motl (December 5, 1973–) is a Czech physicist specializing in string theory. During his active career, he was a competent scientist and an author of mathematics textbooks. Now he is mostly a raging asshole from hell.

Between 2004 and 2007, Motl was an assistant professor at Harvard University. He got the job through competence and talent, and lost it by being a raging asshole. He has not held a university position since. Motl's Wikipedia article is anodyne, but proudly lists all his arXiv submissions. He has not published a single paper there or anywhere else since 2007, when he split from Harvard. He originally got his Ph.D. scholarship because of a paper he posted on the arXiv as an undergraduate.[2]

In 2019, many members of the physics community decided to boycott Luboš Motl's blog.[3]

His blog, The Reference Frame, consists of abuse and insults hurled at anyone he disagrees with, mostly concerning physics. He has an annoying habit of continuing to edit posts for months after making them, making citation difficult, but at least he doesn't change his stated opinions and makes the abuse and insults more refined. If you disagree or dissent from Motl's own opinion, even in the most mild and engaging manner, Motl will ban your disqus account from commenting at his site and then reply to your comments such that you're unable to rebut or engage in any kind of debate with him. He will even go so far as to post your comments to him elsewhere at his site, editing them to change their meaning and tone. PZ Myers has called Motl a "crackpot"[4] (which is also Motl's favoured word for anyone who disagrees with him). It is true that Luboš is willing to embrace crackpot ideas[5][6][7] when it suits his politics. However, his science is generally good within his sphere of competence. The problem is his refusal to recognize that his sphere of competence is finite.

And God help you if you've ever implied anywhere that string theory is anything less than the revealed secret of the Universe, particularly if you're Lee Smolin, Peter Woit or "similar breathtakingly dishonest far-left anti-scientific subhuman activist garbage".[8] Motl has so far failed to keep their papers entirely off the readable categories of arXiv, but not for want of effort.

Physicists' boycott of the Reference Frame[edit]

In 2019, after Luboš Motl's misrepresentation of work by a junior female physicist, among others, many members of the particle physics community decided to boycott Luboš Motl's blog. Below is a public statement by M.I.T. faculty member, Daniel Harlow.[3]

This longish post will be about an issue we've had in the theoretical physics community for years, others may wish to ignore it.

The issue is the continuing attention which is paid to Lubos Motl's blog. Based on various conversations I've had, it seems that a non-negligible fraction of the community still reads it and a non-negligible subset of those readers still takes his opinions seriously (at least about physics). I have even heard that his posts are sometimes cited in conversations about professional opportunities. I thought therefore that it might be useful to make the following points in a public place (this post is public and you are welcome to share it):

1) Motl has been out of the physics community for more than ten years, and this is reflected in his writing. His understanding of post-2006 work is often superficial, and his observations, which he seems to produce more or less off the top of his head, are often incorrect. This is especially the case when he is talking about things which are not related to his previous work. Looking at him as an "expert authority" is a mistake, and anyone with access to more reliable sources who does so is being intellectually lazy and irresponsible.

2) The unprofessional style in which the blog is written, with many personal attacks and repeated use of coarse language, is not appropriate for any kind of intellectual exchange. Many people seem to think that they can view this stuff as a mere distraction, which they can tolerate (or maybe even enjoy) and then screen out to focus on the physics content, but I do not think this is correct. It is not possible to repeatedly read such things without some of it rubbing off on you, at least subconsciously, and moreover the cost inflicted on those who are the targets of such ranting is substantial and anyone who reads it "for fun" is adding to that cost.

3) In particular many readers seem to think that they can separate his hateful political views, which include constant misogyny and racism, from his physics content. Again, this is false. First of all, whenever the target of one of his physics rants is a woman the unprofessional language is far more vitriolic. Words he has applied on the blog to women he disagrees with include "b--ch", "wh--e", "sl-t", and "vermin". I am sorry to reproduce such words here, but I think it is important to be clear about how severe the problem is. Use of such terms is more than unacceptable, it is fundamentally disqualifying. It is simply not possible to "separate the physics content" from such writing. How can we believe anything said on any subject by someone who views more than half of humanity with such contempt? How in particular could anything he writes about the work of a minority and/or female physicist be taken even the least bit seriously?

Enough is enough. The continued quasi-tolerance of this person by our community is not ok. What message does it send to junior people that such behavior is viewed merely as "entertainment", that one sometimes hears things such as "he might be crazy, but his physics is ok"? We can do better, and we should. I've never been a regular reader, but from now on I will refuse to discuss in person or online any blog post of Motl. I hope you will also consider doing so.

In April 2022, Motl stated he 'canceled and blocked' the blog owing to 'censorship pressures'.[9]

Motl defines himself as a "Christian atheist." This seems to be due more to anti-Islamic sentiment and belief in "Western values" than the religion itself.[11]

He's a not a big fan of feminism, either:

Motl doesn't understand the point of Martin Luther King Day celebration. Apparently, black people had to sit in the back of the buses for entirely sensible reasons:

Feminism, homosexuality and the Muslims[edit]

Motl is a climate change denier, having realized that "left-wing groups want to use this carbon theme as a tool for wealth redistribution."[17] His very… distinctive comments can be found on climate change blogs all over the internet (for example, at Stoat, Deltoid, etc.)

There was a picnic on Harvard Quad's lawn, with 60 students, primarily black. Police were called in to check their IDs. Motl reacted thus:[13]

On May 12th, two groups organized a noisy picnic on the Quad's public lawn. Harvard students were everywhere around. Many of them were studying: it was a reading period. Many of them are sensitive and can't concentrate well if there is noise around.

It shouldn't be unexpected that someone called the police. If it were a party I couldn't effectively attend and if there were people around me who would also think that the noise is just too much, I would call police, too.

Wow. If someone makes a huge mess in front of the buildings where some of the smartest young people on the planet are supposed to study, it is illegitimate to call police because it is a black people's party and everyone — the whole community of Harvard students — is instantly accused of racism and the director of the "intercultural foundation" is black, too.

Counter's "foundation" is clearly meant to be a tool to intimidate students and other members of the community, politicize all questions, and make sure that a pathetic hypocritical ideology is more important than a tolerable atmosphere during the reading period and other values that used to be associated with the world of Academia.

These days, the Academia — universities as well as their individual departments — are literally flooded with similar distasteful foundations and committees whose only purpose is to overfill the community with propaganda and fear and to impose very unbalanced, politically biased code of a certain flavor.

Motl is smart, though not nearly as smart as he thinks he is. (It's impossible for anyone to be as smart as Motl thinks he is.) This means everyone who disagrees with him is stupid, probably to the point of criminal negligence: